I have a huge collection of 12" Star Wars dolls. There are about 40 characters in my collection, though this isn't even a quarter of what has been produced over the past 35 years. There are hundreds of Star Wars dolls to collect from companies such as Kenner, Hasbro, Applause and others! The very first of these were produced by Kenner from 1978 to 1980. 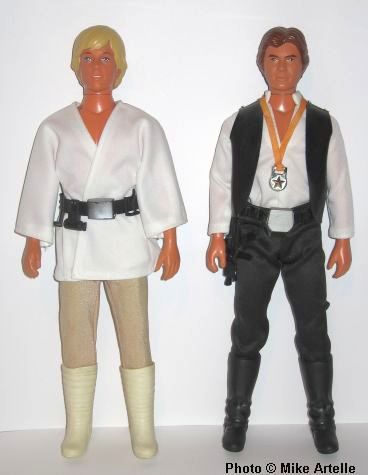 The very first, and in my opinion still the best, Star Wars dolls ever to be made were the 12 inch Kenner series originally available from 1978 - 1980. My brother had Darth Vader, Chewbacca and the Stormtrooper, and I had C3PO (all shown below). The Luke Skywalker doll was the one on my wish list and I finally found one at a flea market in the early 1990s (before e-bay existed). Unfortunately I'm missing his lightsaber and hook. Later in my 20s when I was more serious about collecting, Han Solo became the "Holy Grail" item of my collection. Someday I hope to get the Kenner Indiana Jones doll to go with it. The Luke doll was introduced in 1978 while Han Solo was added to the collection in 1979. 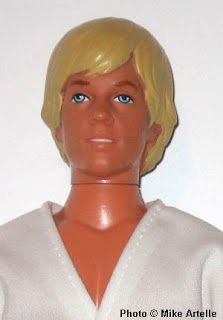 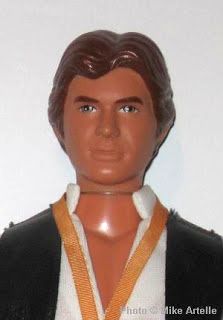 Here is a closer look at the excellent sculpting job for Luke and Han's face. I like the distinct 1970s style that they have while also being awesome likenesses of actors Mark Hamill and Harrison Ford.

I find it very interesting that in 1978 after Kenner produced their 12 inch Star Wars doll of Luke Skywalker, they used a similar doll body to make two dolls based on the Hardy Boys TV series. Shown above is the 12 inch doll for Joe Hardy, as played by Shaun Cassidy. This version of the doll has the hair painted brown. It was also available with the hair painted yellow. The other doll in the series is Frank Hardy played by Parker Stevenson. These two dolls were made with a wider leg stance than the Luke doll. The following year in 1979 the Hardy Boys doll body would be used for the 12 inch Han Solo and Ben Kenobi dolls. In 1982 Kenner would again use this doll body and the Han Solo head to make a doll of Indiana Jones based on the movie Raiders of the Lost Ark.

Here is a link to a website showing the 1978 Kenner catalogue advertisement for the Hardy Boys dolls. The doll being used for Joe Hardy is clearly a prototype that was made with a slightly modified Luke Skywalker doll. The jacket shown on the doll is not the red one that was eventually produced, shown above. 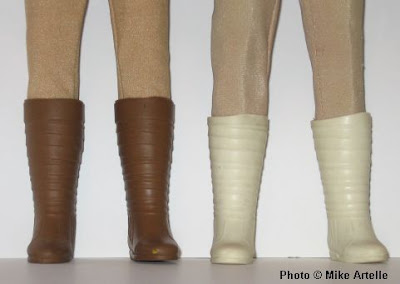 While at a nostalgia show in March 2013 I finally found a belt for my Luke doll (seen at the top of the page). It was on another rather well played with Luke doll that was wearing Ben Kenobi's boots. When I compared these boots to the boots on my Luke doll I noticed that the top edge of Luke's boots were cut shorter and rather unevenly, which I thought was rather odd. So I searched online for images of the boots to see if they were made this way or if mine were just hand-cut by the previous owner. Strange as it may seem, I did find other pictures that confirmed Luke's boots were issued this way. 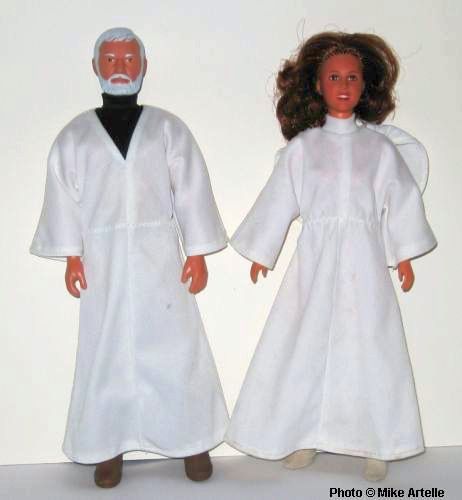 It seems that I was destined to own the Kenner Ben Kenobi doll this year (in 2013). Two months after finding the brown boots, shown above, I attended Ottawa Comic Con and found the doll...missing his boots! The same vendor had Ben's robe on another 12 inch figure, so I bought it as well and switched the costumes. Now all that I'm missing is Ben's brown Jedi robe and his lightsaber! Kenner didn't bother giving this doll a belt. The same vendor also had Princess Leia and was kind enough to give me a deal since she is missing a few parts. Her hair is not in the original style, and her belt and shoes are missing. However she does have her socks and the outfit is in fair shape. 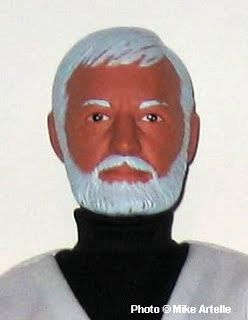 Here is a closer look at the faces. Kenner did an especially awesome job on Ben Kenobi. This doll was released in 1979. Princess Leia and Luke were the first two dolls available from this series and were both released in 1978. 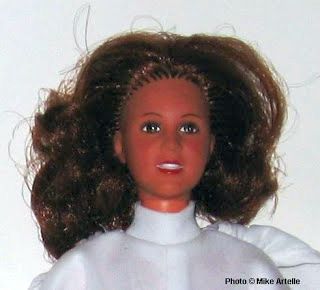 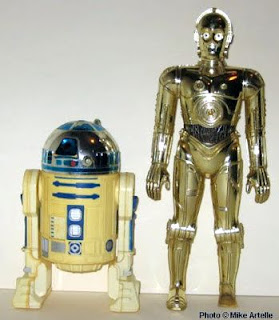 Here are Kenner's large size figures of R2-D2 and C-3PO, made in 1978. They are both in rough shape. R2 has discoloured so that he's now yellow instead of white, and I accidentally broke C-3PO's left foot when I was a kid. Both of these toys were well played with! 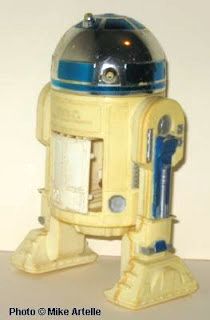 R2-D2 has a button on his front that opens a door on his back were the "secret plans" were kept. Originally R2 came with two plastic square discs that were found inside the secret compartment. You can see how much the toy has discoloured as compared to the white trap door that was made out of a different type of plastic. 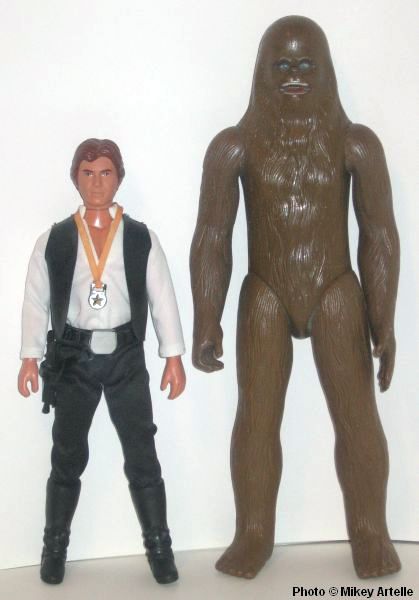 Here is the 12 inch Han Solo doll next to the 14 inch Chewbacca large size action figure! Chewy is from 1978. I'm missing all of his accessories, which included the bandolier and harpoon style gun. Chewbacca has been well played with in my family. The toy was originally my brothers as a Christmas present in 1978, then he gave it to me when I was in my mid teens, then we gave them to his kids when they were little, and now that his kids have grown Chewy is back in my collection again! So he's survived two generations of kids playing with him, that's a tough Wookie! :) 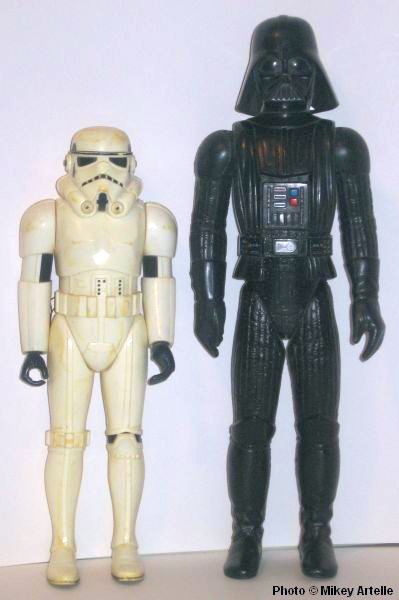 Here is the 12 inch Stormtrooper and the 14 inch Darth Vader large size action figures, both from 1978. Darth Vader originally came with a black fabric cape and a red lightsaber which are missing. I'm also missing the Stormtrooper's black blaster gun which fit through a string loop at the right side of the figure, shown below. These two toys were also originally my brother's and joined Chewbacca on his adventures while being played with by two generations of kids in my family. 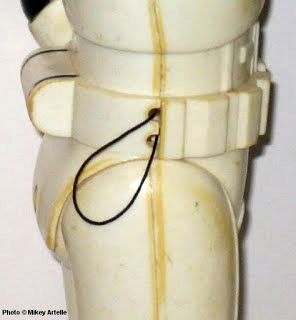 The string loop which held the Stormtrooper's blaster gun. 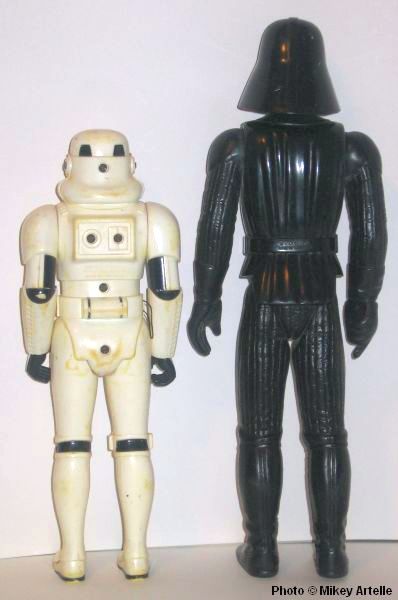 Here is the back view of the figures to show the detail of the design. The Stormtrooper and C-3PO large size figures were both marked "General Mills Fun Group Inc" on the back, while the Darth Vader and R2-D2 just have initials "G.M.F.G.I.". R2-D2 is also marked Kenner, the same as all four of the dolls. 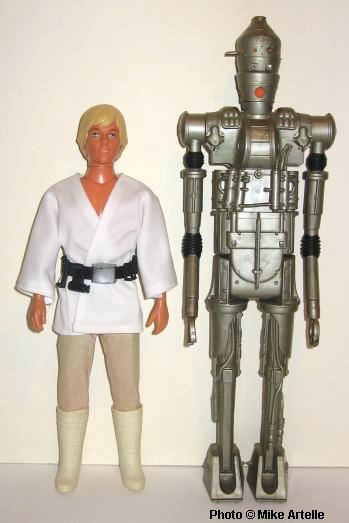 Here is the 14 inch IG-88 large size figure by Kenner that was released in 1980, shown next to the 12 inch Luke for size comparison. I'm missing IG-88's weapons and bandolier. Unfortunately this was the last character Kenner made for their 12 inch series. I found this one a few years ago at a local nostalgia show that I've attended since the early 1990s. To my knowledge, IG-88 is the only figure in the collection that is marked with the L.F.L copyright for Lucas Film Limited, instead of the General Mills or Kenner markings. I don't have Boba Fett or the Jawa from this collection so I haven't seen the markings for those two yet.

Another look at IG-88. This is the most difficult figure in the set to find, especially with all of his accessories.

Here is the blaster for Kenner's large size Jawa figure from the late 1970's. It looks black in this photo but it's actually dark grey. I found this at a second hand store and didn't know that it was a Star Wars weapon, but it has that look to it so I brought it home. I thought it would be impossible to figure out what large size figure this goes with, but soon discovered that it belongs with the Kenner Jawa figure, which is an awesome find! What are the odds of that happening??? Now I just need a Jawa to go with it!

I still have to do photos comparing Kenner's Luke, Han Solo and Princess Leia dolls to their Hasbro counterparts, and I don't yet have the Hasbro Chewbacca or IG-88, but I've done all the others: 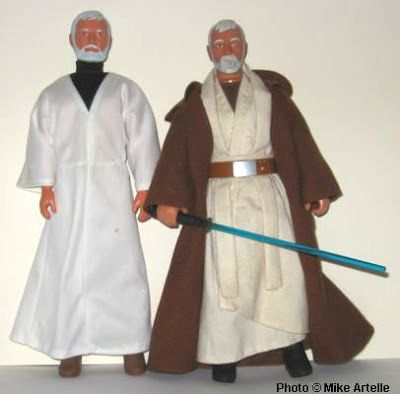 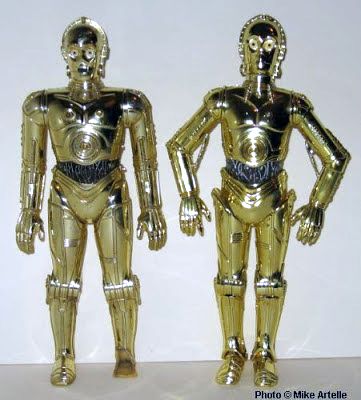 A comparison of the original Kenner C-3PO large size figure from 1978 with the Hasbro figure made in 1997. 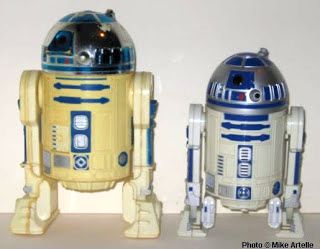 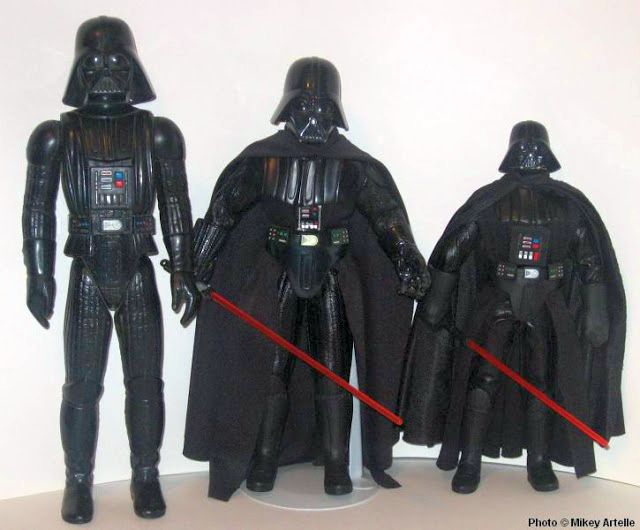 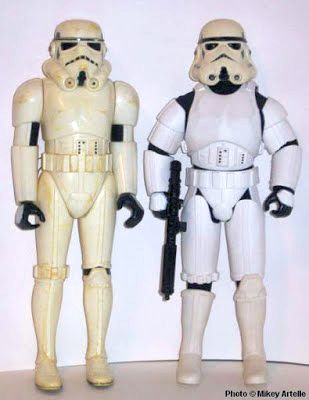 The 12 inch Kenner Stormtrooper large size figure from 1978 and the Hasbro 12 inch Stormtrooper doll from 1996.

Here's an awesome website showing all of the large size Star Wars figures from the 1970s and their accessories: http://theswca.com/images-toys/12inch/index.html 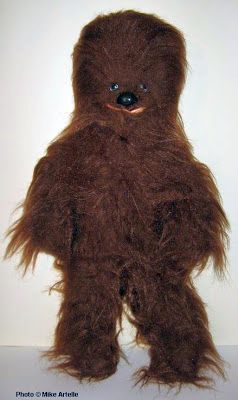 Here is a must have item for any die hard collector of Star Wars toys from the 1970's. This is the rare Chewbacca plush toy that was made by Regal Toy Limited, a Canadian toy company. This doll is 22 inches tall and was sold only in Canada for a brief time, likely in 1977 but no later than 1979. In the United States a 20 inch version was made by Kenner in 1977, which I understand was only available in the US. In any case, the Regal doll is harder to find. Both versions however are hard to find in complete condition as the dolls were originally sold with a rather cheaply made plastic shoulder strap (or bandolier) that contained four hard plastic squares. The shoulder strap was easily lost as were the plastic squares.

Finding these dolls with the original hangtag is also difficult. The hangtag for the US version is a large circle with full colour graphics on it, while the harder to find Canadian version had a much smaller tag printed with white text on a blue background. Regal also made a rare plush toy of a Jawa and a very scarce hand puppet (mouth puppet) of Chewbacca using the same brown furry fabric with the same plastic eyes and nose as this plush toy. Kenner also produced a plush toy of R2-D2 in 1977 that was available at the same time as these plush toys. This is a link to a site showing the Chewbacca puppet: http://theswca.com/index.php?action=disp_item&item_id=39750 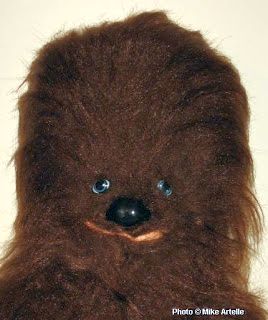 Here is a closer look at the face of the Regal Chewbacca plush toy. This one has a taller forehead than it's American counterpart. 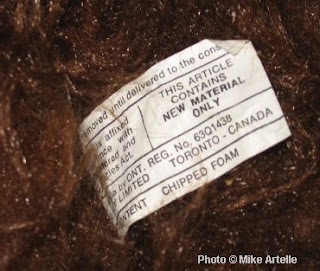 The only manufacturers tag says "Regal Toy Limited" on the bottom left but does not have any copyright information. The opposite side of the tag is in French. 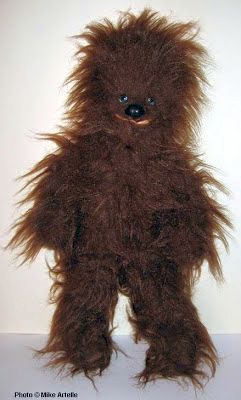 I thought it would be funny to also show what the Chewbacca doll looks like without his fur neatly combed! 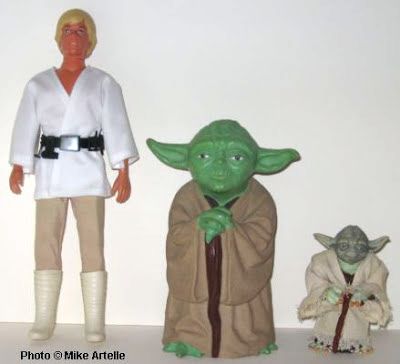 Here is the original Kenner Yoda puppet next to the 12 inch Luke doll for size comparison. The Hasbro Yoda doll from 1997, which is scaled to the 12 inch dolls, is also shown for size comparison. As Kenner didn't make a large sized Yoda figure back in the early 1980s this Yoda puppet had to do! The puppet originally had white curly doll hair but kids would often cut it off, as is the case with this one. I found this puppet second hand at a yard sale and played with it a lot during my childhood. That being said, I'm really glad to finally have the Hasbro 12 inch scaled Yoda doll! Below are some additional photos of the puppet. 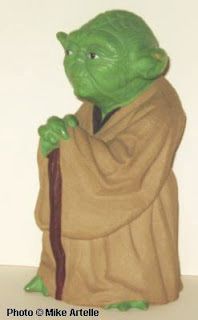 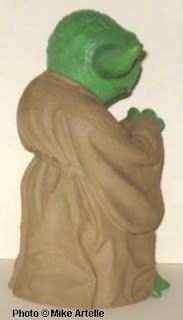 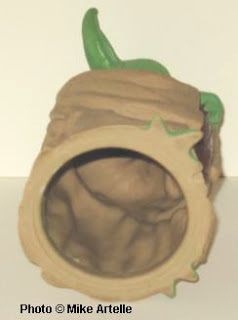