Considering the machismo that was common place in the military during the 1960s, I find it quite ironic that the very first dolls for boys were based on an army theme. Hasbro marketed their 12 inch G.I.Joe dolls as "action figures" to mask the fact that boys would be playing with dolls. G.I.Joe was a huge success in the mid 1960s through to the late1970s and is responsible for establishing the market for every series of "dolls for boys" that has been made ever since by any toy company, including Mego. Personally, I was never really interested in G.I.Joe dolls because of the war theme as well as the crudeness of the original doll bodies, which look rather odd without any clothing. I also like the 8 inch doll format better than 12 inch. But credit must be given where it is deserved, and so it must be said that G.I.Joe is were it all started. For that reason I have a few Joe dolls in my collection as examples.

Here is Eagle Eye G.I.Joe made between the late 1960s and late 1970s. This doll has movable eyes which are controlled by a lever at the back of it's head. When the lever is moved side to side the eyes look left or right. Unfortunately the plastic hands have dried out and the fingers are crumbling away. I bought this one in this condition, and he was only wearing army pants so I have no idea what the original costume looks like.

Here is a link to the Canadian Industrial Design for the original G.I.Joe doll. It was registered by Hassenfeld Bros. and Hasbro Industries Canada in 1964: 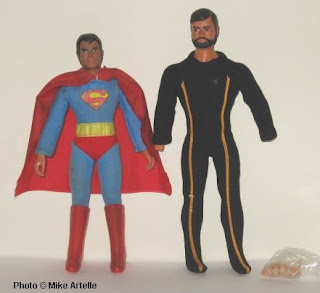 This is a Super Joe doll wearing a black outfit that has two vertical yellow stripes on the front. I've shown him next to an 8 inch Mego Superman for size comparison. His hair and beard are painted. The doll has two buttons on his back (shown below) to control each of his arms. Unfortunately his hands have completely disintigrated and turned to powder - see the small baggie next to him, that's what's left of his hands! It's my understanding that Super Joe dolls are more difficult to find than the 12 inch Joes. I found mine second hand in the mid 1980s for only five dollars! He looks like a villain from the Superman II movie, so that's who he has been since joining my collection. As Mego never made the Superman II villains in the 8 inch size, this worked out well for me! 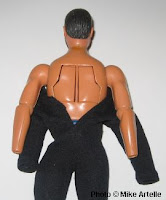 Two buttons on Super Joe's back to control his arms. 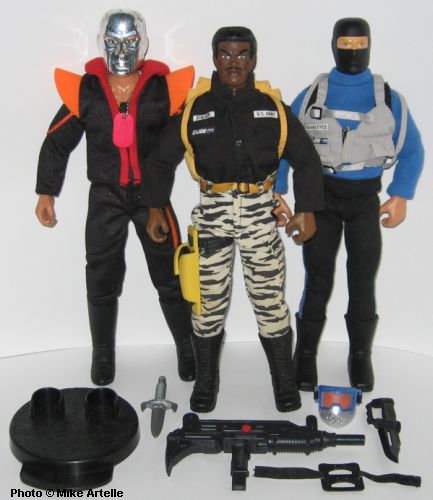 Among the three G.I.Joe dolls shown above are two of the first four figures to be offered in this collection in 1991: Stalker (centre) and Snake Eyes (on the right). The figure wearing the silver mask is Destro (on the left) was offered in 1992. I bought these second hand as a set and am missing some of the accessories. Below is a look at Destro's face and his two piece mask. 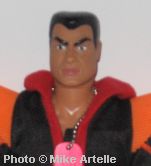 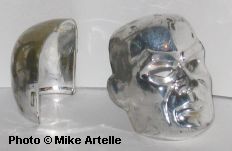 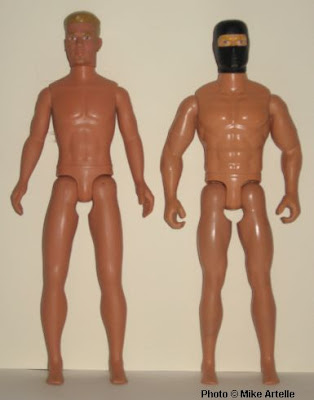 Here is a comparison of Hasbro's New Kids on the Block doll body from 1990 next to Hasbro's G.I Joe doll body that was introduced in 1991. They are both essentially the same type of doll, with the same type of joints and rubber legs, only the G.I Joe is sculpted to be more muscular. Therefore, product wise they are the same thing, the only difference is the characters that they are depicting. In 1996 this same G.I Joe doll body was used for Hasbro's Star Wars doll series. (I've posted the Star Wars doll collection on separate pages of this blog. See the celebrity dolls page for more info about the New Kids doll collection.) 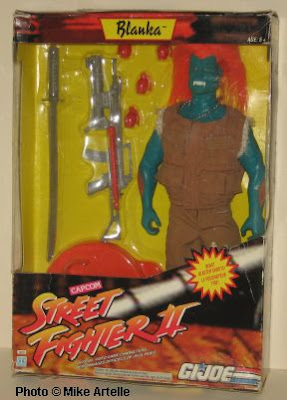 In 1993 Hasbro produced a series of 12-inch dolls based on the video game Street Fighter II. The collection included four dolls: Blanka (shown above), M.Bison, Guile, and Ryu (which I don't have). These are characters that appeared in the video game. Hasbro released the series as part of their G.I Joe line of dolls. 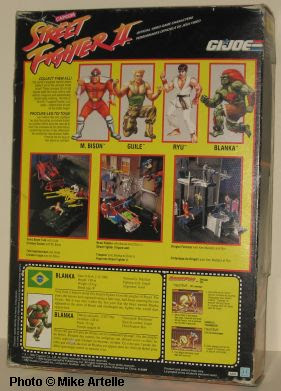 The only character I wanted from this set was Blanka, because of his awesome bright orange fun fur hair and green body. What a weird looking dude! Blanka was basically the "Increadible Hulk" of the early 1990s, as Marvel's Hulk character was experiencing a major slump in popularity at the time. Above is the back of the box showing the four characters in the series, along with the small 3.5 inch action figures that were also available. 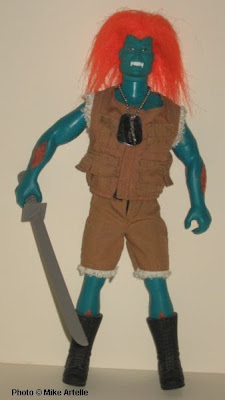 Here is what Blanka looks like out of the box. He's awesome! Hasbro gave their doll a vest and boots even though the character only wears shorts. All of Hasbro's G.I Joe dolls came with dog tags. 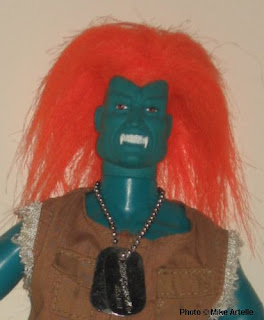 Here is a closer view of Blanka's face. Hasbro didn't bother to paint his eyebrowse orange even though they were very nicely sculpted... unfortunately they were left green. The orange fuzzy hair is glued to his head.

Here is what Blanka looks like without his vest and boots, as he should be. His feet are quite small, which is why I suspect Hasbro gave him boots. Hasbro also added some flocking on his chest, arms and legs. 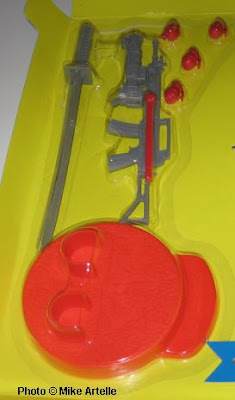 Blanka came with a sword, a gun that shoots a missile, 4 grenades, and his ultra macho doll stand.


By the mid 1990s Hasbro's various 12 inch dolls were selling so well that the company resurrected yet another popular "dolls for boys" brand, this time in the form of Action Man. My understanding is that in the 1960s the original Action Man dolls were sold only in Europe where they took the place of G.I Joe. In the 1990s however, Action Man and G.I Joe were sold together in North American toy stores to compete against Mattel's 12 inch Max Steel dolls. 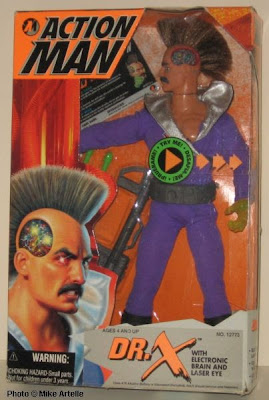 The first villain in this new Action Man collection was Dr. X!!! As soon as I saw this doll I had to have it, however Action Man himself seemed quite boring compared to Dr. X, so I only bought the villain. This was on a trip to the USA, and I recall that the Toys R Us stores here in Ottawa, Ontario didn't yet carry the Action Man series. Dr. X was made in 1995, but it wasn't until 2000 that Action Man would make his way to stores in Ottawa. I'm not sure if this was also the case for the rest of Canada. I've often wondered if Dr. X and the first wave of the Action Man series were ever released in Canada. Below is the back of the box for Dr. X!!! 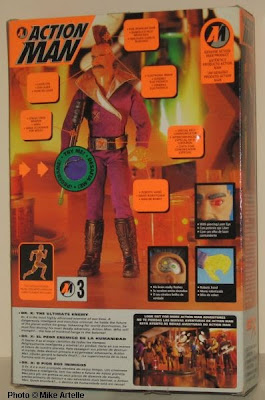 Here is Dr. X out of the box. He has an awesome Mohawk, which is described on the box as "evil mohican hair"..whatever that means? He also has an "electronic brain" with green flashing lights that are activated by a button on the doll's back. This also makes the red "laser eye" light flash as well. The doll's "robotic" left hand is made out of yellow tinted clear plastic. It's interesting to note that although Hasbro made this doll with jointed wrists in 1995, Hasbro did not bother to give their Star Wars dolls jointed wrists when the collection was first introduced in 1996. Star Wars fans had to wait a full year, until 1997, for the dolls to be updated with jointed wrists.

Here's all the stuff Dr.X comes with: a gun that shoots missiles with two missiles, and two mission cards. 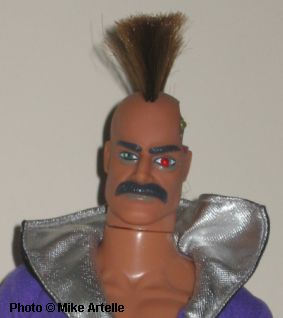 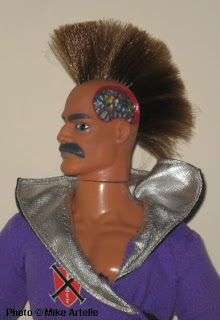 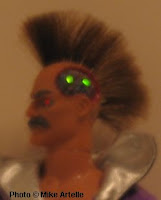 Here is a closer view of Dr. X's face and his exposed "electronic brain". I took a picture without a flash to show the green lights and red "laser eye" that light up. Below is the button on the doll's back that controlls the lights. The right side of Dr. X's head is just bald. 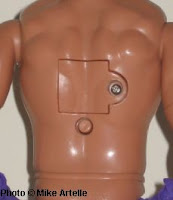 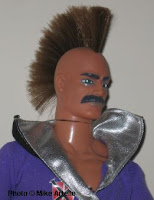 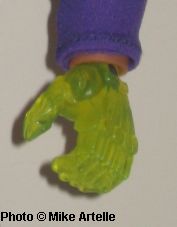 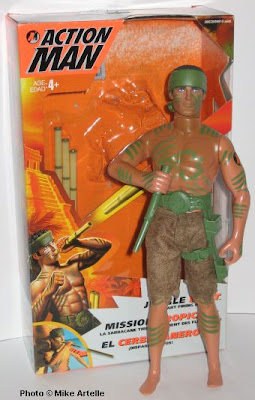 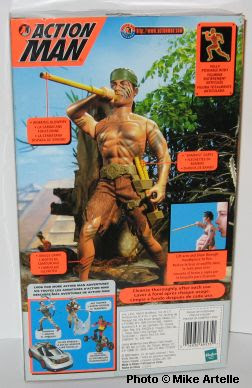 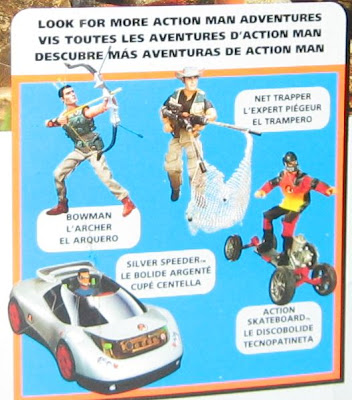 Here is a closer view of the back of the box showing the assortment of Action Man dolls and vehicles that were available.

This is General Ursus from Hasbro's  Planet of the Apes 12 inch doll series. He's missing his helmet and rifle. Hasbro initially released three dolls in this series including Ursus, Dr. Zaius and Cornelius. They were all sold in boxes with identical artwork. The only exception is that the box for Ursus said Beneath the Planet of the Apes on the front, while the other two boxes just said Planet of the Apes. These were released at the same time as Hasbro's 12 dolls based on Universal Studios Monsters, which included Frankenstein, Mummy, Wolfman, Bride of Frankenstein and Phantom of the Opera, all of which were packaged in the same type of window box as the Planet of the Apes dolls only with different artwork. The Apes and Monsters dolls were marketed together as part of Hasbro's Signature Series.
Shortly afterwards a second series of Planet of the Apes 12 inch dolls were released. This set included Zira, Taylor, a Gorilla Soldier wearing an orange and red outfit, and a Gorilla Sergeant wearing a black outfit with a silver stripe detail. If I'm not mistaken, the two Gorilla dolls had the same head as Ursus. These 12 inch dolls were sold in clear plastic tubes, as were a second series of Universal Studios Monsters. The Monsters set included Son of Dracula, Creature from the Black Lagoon (this one is a large size action figure rather than a doll), the Invisible Man, and a more detailed Mummy titled The Mummy's Tomb.
In 2001 Hasbro made a third series of Planet of the Apes 12 inch dolls. This set was based on the new Planet of the Apes movie by Tim Burton and included three dolls: Major Leo Davidson, Attar (the Gorilla) and for the last Hasbro made an unusual choice to include the female character, Daena. 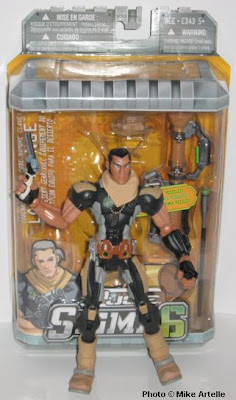 This is a series of 8 inch action figures with multiple points of articulation. Each figure had a bunch of accessories and most have one piece of fabric clothing. I really like the designs of these figures, however the joints are very stiff and difficult to move. Shown above is Long Range who has a fabric bandana around his neck. 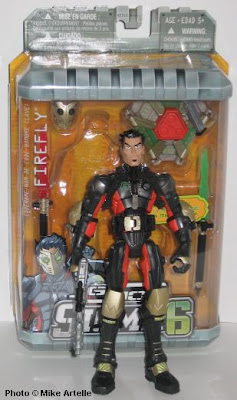 This character is Firefly. I really like the face expression on this one. 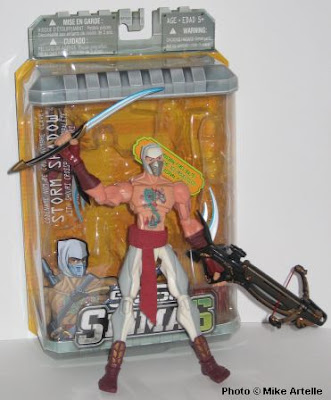 This is Storm Shadow. He has a fabric sash around his waist. 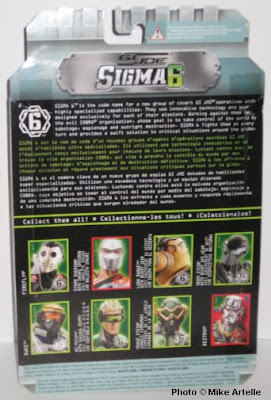 Here is the back of the box showing the 8 figures that were available. The others are: Duke, Hi-Tech, Snake Eyes Jungle Commando, Snake Eyes with Night Ops Gear, and Destro.