Around 2005 several American toy companies began producing Mego style dolls. Among them is Bif Bang Pow! which has since released several lines of dolls based on new and classic TV shows. I've made an attempt to document all of their 8 inch dolls here, however this list is still incomplete. As I'm unaware of the release dates for certain collections I've organized this list alphabetically...

The Ambiguously Gay Duo, c 2016
These dolls are based on animated segments that have been aired on the Saturday Night Live TV show beginning in 1996. I have to say, as a gay man I find the segments in question to be rather rude and derogatory towards homosexuals, and not funny at all. It's akin to "Brer rabbit and the tar baby", "Charlie Chan" films or the "One Little Indian" song. Such material is born of intolerance towards human diversity. In other words, it's quite ignorant to characterise someone in an undignified way and then laugh about it just because they are different. The dolls themselves look to be well made and seem to capture the style of the original Mego doll quite well. It's too bad the source material for these dolls is so disrespectful. Rather than exclude these dolls from my list I think it's important to shine a huge spotlight on them so that people can understand how homosexuals are still being treated by society. Remarkably these were released recently, around 2016! Shameful!


Anthrax
Based on the guitarist from the heavy metal band Anthrax.


Battlestar Galactica, 2012
Based on the original TV series which ran from 1978 to 1979. In Canada, the pilot for the series was also released in cinemas as a feature film. At the time of the shows initial broadcast Mattel produced a series of smaller 3 inch action figures as well as two 12 inch action figures. Due to contracts however, the character Apollo was not marketed. Therefore, this 8 inch series from Biff Bang Pow is the first time that the character was included in a collection of Battlestar Galactica toys. 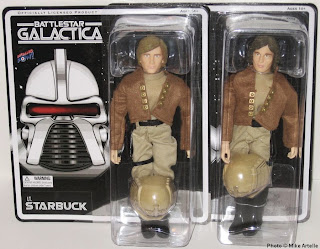 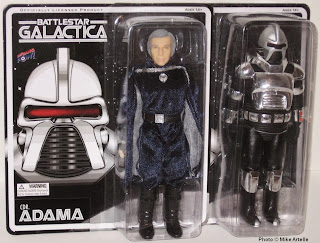 
The Big Bang Theory
Based on the TV series which debuted in 2007 and is still in production.

Dexter Morgan: Wearing a moss green long sleeve shirt with three black buttons at neck, moss green cargo pants with a pocket on the side of each leg, brown shoes, hands are black plastic. Comes with a knife.


Doctor Who
Based on the classic TV series which has been ongoing since 1963. This set is specifically based on characters from the mid to late 1970's run of the program when actor Tom Baker portrayed Doctor Who. This Bif Bang Pow 8 inch doll series is based on Mego's original 9.5 inch series of dolls from the 1970s that had only been released only in Europe.

The First Doctor
The Eleventh Doctor


Lost
Based on the TV series that ran from 2004 to 2010. These were among the very first 8 inch dolls to be offered by Bif Bang Pow.

Mike Tyson Mysteries
Based on the animated TV series that began in 2014 and is still in production.


The Six Million Dollar Man
Based on the TV series that ran from 1973 to 1978. During the original run Kenner produced 12 inch dolls based on the series. http://mikeysdolls.blogspot.ca/p/tv-character-dolls.html
Not long ago, researchers for the Mego Museum website discovered that an 8 inch Mego-style doll of the Six Million Dollar Man had also been produced in Peru by Basa Toys as "El Hombre Nuclear" during the 1970's. http://www.megomuseum.com/galleries/six-million-dollar-man-el-hombre-nuclear/
Therefore the Bif Bang Pow 8 inch series is the third Six Million Dollar Man doll to be produced, and the second 8 inch doll to be marketed.


The Twilight Zone
Based on the classic TV series which ran from 1959 to 1964. These dolls are all presented in grey tones to mimic the Black & White look of the TV series which aired before colour television was available.