As a doll collector, I pretty much like to collect any male character dolls that I find interesting, which most definitely includes fashion dolls. Although I have never been interested in collecting Barbie dolls or anything that's excessively frilly, I do have quite a few male fashion dolls in my collection. Just to clarify though, I think it's perfectly fine for guys to collect Barbie dolls if that's what makes them happy, and I do know quite a few collectors who adore that girl! It just happens that I always found Ken more interesting than Barbie, and from a collecting point of view male fashion dolls are often more challenging to find than the female dolls, as fashion doll collections usually focus on the girl dolls in a given series, with the typically lone male fashion doll included as a mere accessory. 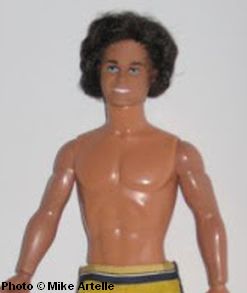 All of my Ken dolls are found on the "1971 - 2010: Mattel Big Jim, Ken, and Max Steel Dolls" page of this blog, here: http://mikeysdolls.blogspot.ca/p/mattel-big-jim-max-steel.html 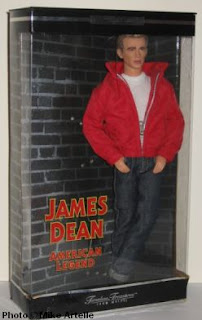 Celebrity fashion dolls are found on the "1973 - 2011: Celebrity Dolls" page of this blog, here: http://mikeysdolls.blogspot.ca/p/celebrit-and-other-dolls.html 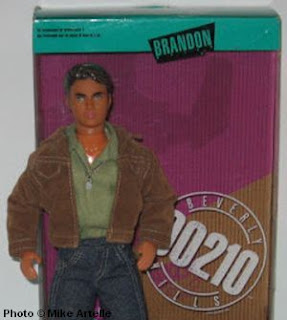 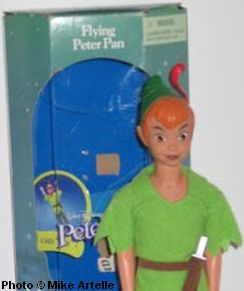 Fashion dolls based on animated characters, including Disney dolls, are on the "1970 - 2005: Animated Character Dolls" page of this blog, here: http://mikeysdolls.blogspot.ca/p/disney-character-dolls.html
All the remaining fashion dolls in my collection are shown below....
Bratz Boyz, 10 inch dolls by MGA, 2002 - present
Yes, I have Bratz Boyz dolls! Seventeen of them and counting! The detail in the clothes and the styles/themes that have been presented for the Bratz Boyz are quite exceptional and so I had to add some to my collection. Not only is the quality of these dolls very impressive, they're cute too! I like that they have big heads and small bodies. I don't think it's possible to make a doll any cuter than the Bratz Boyz! They're a fun departure from the standard fashion doll or action figure type doll. It's also interesting that the company that makes the Bratz Boyz dolls is called MGA, as those are my initials: Mike G Artelle! 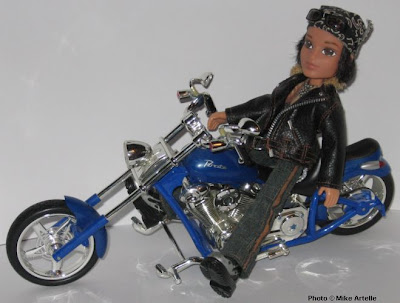 Here is the Bratz Boyz motorcycle set, which introduced Cade as a new Bratz Boys character. I'm very impressed with the detail in the jacket. This motorcycle was later reissued in different colours (red, light blue, and white) with a Bratz Girl as the driver in place of Cade. 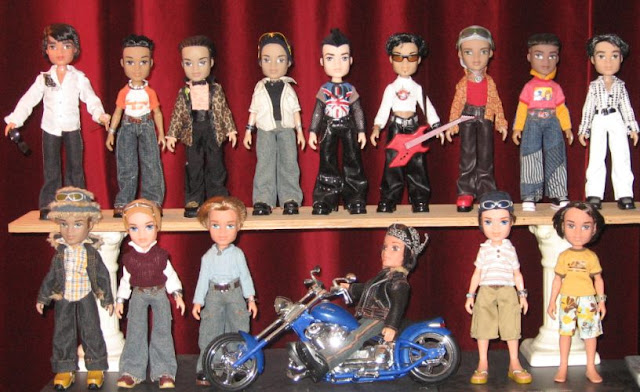 Shown above are 15 Bratz Boyz dolls from my collection! Each of their names are below with the name of the series that they are from.

Bratz World Braden "the new boy in town" (sold in a 2 pack set with Yasmin, a Bratz girl doll which I donated to a thrift store) 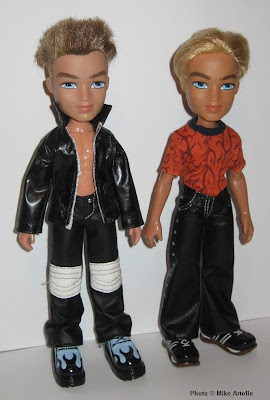 Here are two more Bratz Boyz from my collection, for a total of seventeen! I found these at a thrift store so I'm not certain which collection they are from or which Bratz Boyz character they are supposed to be. They were each wearing the pants shown, and I've added some of the spare clothing  (shoes, shirt and jacket) that came with some of the other Bratz Boyz shown above. I hate to see these dolls orphaned in thrift shops!

Below are some closer views of the Bratz Boyz from my collection to show the detail of the clothing. Considering these are mass-produced I find them to be quite impressive. Click on the images for a jumbo-sized view! 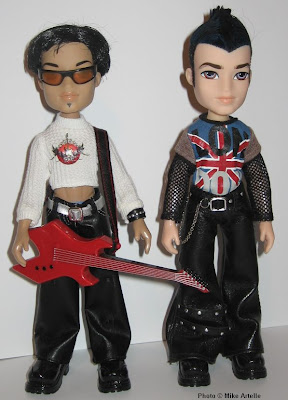 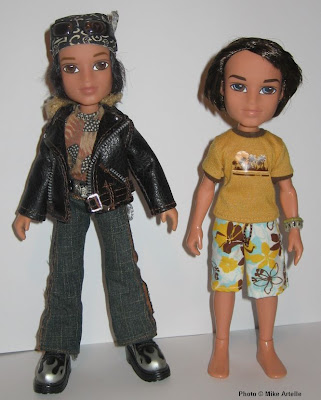 Bratz Boyz Motorcycle edition Cade and "Sun-Kissed Summer" Cade
It's too bad MGA didn't sculpt toes on Cade's feet! He looks kind of silly without them. 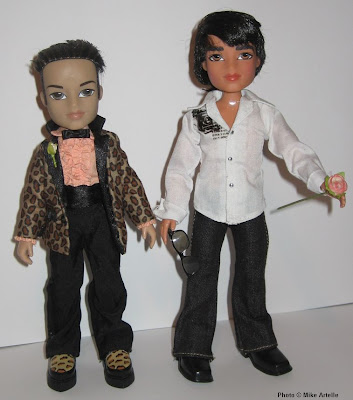 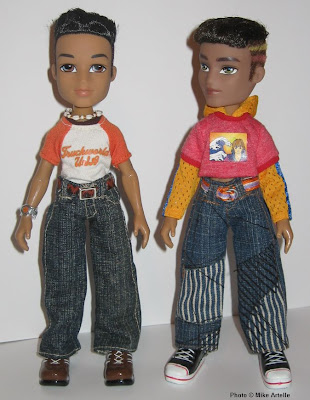 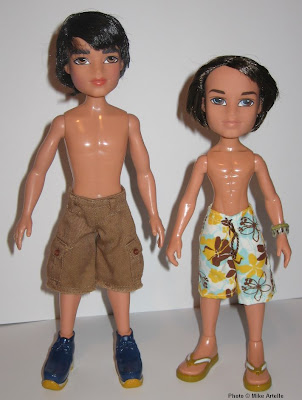 Here are Braden and Cade to show the different doll body types. Bratz World Braden was the first Bratz Boyz doll to use the larger sized body. There are now several Bratz Boyz dolls available in this format.

Other than the shoes, the clothing from the smaller body type Bratz Boyz does not fit on the newer sized doll. I like the Braden doll and am glad to have one in my collection, but I prefer the original smaller sized Bratz Boyz as they are funnier with the small body and large head.

There is a series of sports Bratz Boyz that I'm hoping to get someday which includes a baseball player, football player and a race car driver. They make so many of these dolls that I only collect the ones that I like rather than trying to get every single one (which is my quest for the original 8 inch Mego dolls!). It would be neat to see Bratz Boyz Superheroes someday! It would also be interesting to have some black Bratz Boyz dolls added to the collection as I haven't seen any yet, which I find odd considering the Bratz dolls are all of different ethnic backgrounds. There is a black female Bratz doll available but not a Boyz doll. Hopefully MGA will remedy this someday soon if they haven't already. 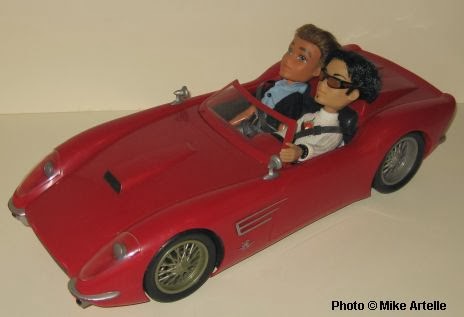 Here is a Bratz Boyz car that I found at a thrift shop. I've searched online for this toy and found a white version which is quite common, and a pink version, which seems to be as rare as this red version. The cars were sold as the "Bratz World Convertible Cruiser". The plastic and weight of the car is similar to the Mego cars for the 8 inch superhero dolls (which is what I grew up with) but this car is designed to be more solid. The bottom of the car is also finished insted of being left hollow. There are no sound effects or light up parts or spring loaded missles, which is a nice change. A toy car that's just a toy car! The look of this car is awesome too, similar to a Firebird or Z28 from the 70s. I think toy vehicles are critical for a good doll series. It's typical for smaller action figures to have vechicles, but less so for dolls because of the larger scale. So I find having a vehicle for a doll series makes a collection more unique, and for kids, adds to the playability of the toys. Below is a side view.

Here is one of my all time favourite dolls ever made. This is Jake dressed as a lifeguard from the Liv doll collection, which is a fashion doll series aimed at girls. The collection includes five female dolls and one male doll (Jake). This is a very well made doll with excellent articulation. The box says"150+ poses". Many of the joints on this doll are very much like a Mego doll, which increases Jake's cool factor several notches! Even the type of plastic used is reminiscent of a Mego doll. Jake is a totally cool doll for so many reasons. Even though space to display my collection is limited, I've kept him sitting on my shelf since I bought him.

Here is the back view showing the opening for the shirt which uses Velcro to stay closed. The shorts are made the same way. 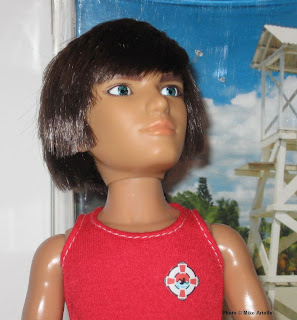 Here is a close up of the doll's face to show how the eyes are separate pieces that were inset, which is a nice detail and one that I've never seen on a male fashion doll before (with the exception of Eagle Eye G.I. Joe, which has moveable eyes.) Click on the picture for a larger view. 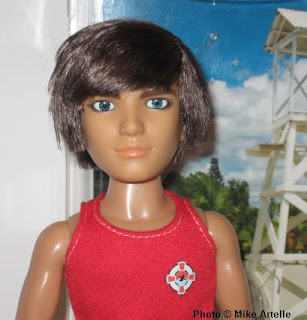 Here is another view of Jake's face. He's a very handsome doll. I think his face is perfect. 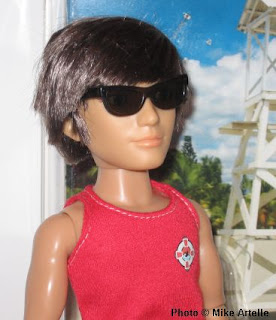 Here he is looking cool with his shades on. 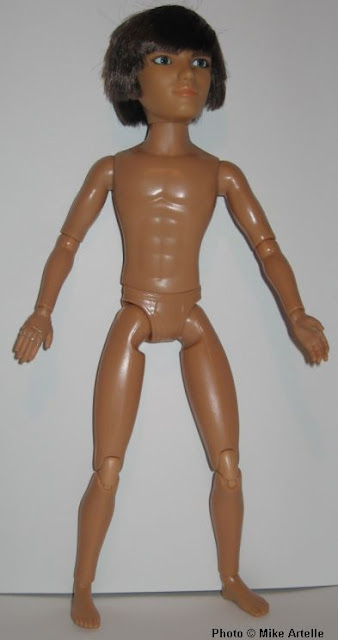 The doll body for Jake is quite slim. This photo shows all of the doll joints. His neck, shoulders, elbows, wrists, hips, and ankles are all ball joints which gives him awesome pose-ability. There are two joints in each of his knees: above and below the kneecap piece. His waist can turn and move side to side. The way the doll is assembled is also very well done making for a very good quality doll. Below is the back view.
It would have been awesome if they made other male characters using this doll body as it is so well made. It's a shame it was only used to produce the one doll... though I'm glad to have it! But I can't help thinking how awesome it would have been for Jake to have some buddies to hang out with. It's so strange that such a well made doll wasn't popular enough to warrant extending this line of dolls. Though if I'm not mistaken Jake was a later addition to the series, and therefore doll collectors are lucky that he was made at all! Though they should have added more male dolls along with Jake. Five girl dolls seems like over kill to me, bring on the boy dolls! :) 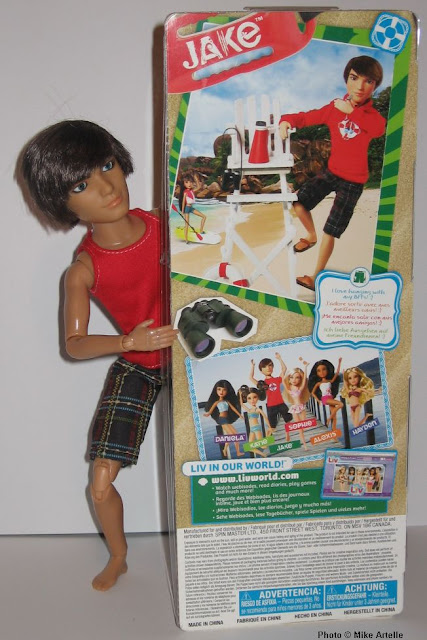 Here's the back of the box showing what is likely a prototype of Jake with shorter hair. I think the longer hair that the doll was issued with looks better. In the top picture he is wearing a red hoodie with a large logo and sandals, and in the bottom picture he has a red T-shirt with a large logo. However the doll was only issued with the red tank top shown which has a small logo, and he does not have sandals. The photo also shows several accessories such as a whistle, binoculars, and a megaphone, but the only accessory he came with are his sunglasses.
In addition to the Jake doll Spin Master produced three outfits for Jake:
1) Fashion Date Night: A grey shirt with black bird (crows?) silhouettes across the front, red pants, black boots, a necklace, a black wristband, and headphones.
2) A Night Out: A light blue long sleeve shirt with buttons at the front, dark blue jeans, light brown shoes, a rose and a heart shaped box of chocolates.
3) Lifeguard set with a yellow tank top and several lifeguard accessories (but still no binoculars, megaphone, whistle, hoodie, t-shirt, or sandals!).

I don't have these in my collection but I found these pictures online: 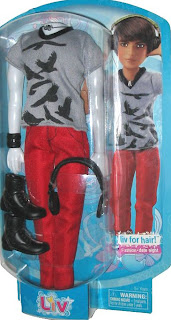 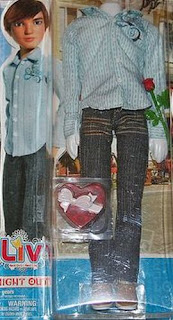 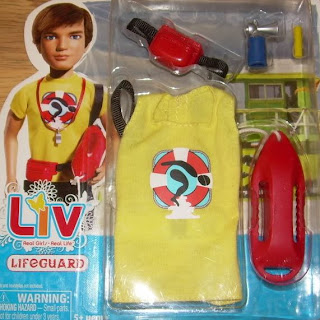 This is Totally Troy from the "TY Guyz" collection made by TY Inc. which is the same company that produced the Beanie Babies. This is the only TY Guyz doll that I know of. It was made to go with the TY Girlz collection of dolls. The tag on his right arm says TY Guyz on it rather than TY Girlz. This is a very well made doll with very soft fuzzy hair. The hands and feet are made small enough to allow the clothes to be removable. The doll body has striped underwear sewn on as part of the doll and wire inside so that the arms and legs can be posed. The tiny shoes are removable but the socks are sewn on in place of the feet. I found this doll at a thrift store with all of the tags still attached! Below you can see that he came with a comb attached to his head. The back of his shirt and the fly of his pants are held closed with Velcro.