There are several dolls in my collection that don't fit into any of the page categories on this blog but are still very awesome and deserve to be featured, so I've added them all here.... 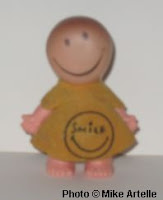 I found this silly doll at a thrift store. It's not much of a doll but it's kind of bizarre and very retro. In fact, I think this little guy is so cheesy that he's awesome! The doll's head turns and that's about it. His yellow skirt is just a one piece shape cut out of the cheep flocked fabric that was so commonly used in the '70s. There's no stitching on his clothes, the fabric is just wrapped around and fastened at the back. The back of the head is marked "Uneeda Doll Co. Inc. MCMLXXI HaPee Wee".

Unfortunately, after I took these photos and saw how blurry they turned out, I realised that I misplaced the little guy so I couldn't take a better photo. At the moment he's officially "lost" in one of my many boxes of collectables! I'm sure he'll turn up eventually though.

When I posted this, I also Googled the Uneeda company and found that they used this same doll body to make many different dolls, both male and female. I also found that a Canadian Industrial Design for this type of doll was registered by Uneeda in 1967: http://www.cipo.ic.gc.ca/app/opic-cipo/id/dsgnDtls.do?appNm=29199&lang=eng&status=OK

The "status" for the Industrial Design registration says that it's in the public domain. You have to be careful with this type of thing as it's a bit misleading. Even though the industrial design is now in the public domain it's very likely that the doll itself is still protected by copyright.
Fighting Furies, 8 inch doll by Matchbox, 1974

This series of pirate dolls by Matchbox is not very well known, though very well made. Above is Captain Hook who was depicted as the villain in some of the packaging artwork, but in at least one case was shown as a companion to the hero Captain Peg-Leg. I love that this doll has one tuft of rooted doll hair on the side of his bald head! He also has a button on the side of his torso to operate the doll's arm for "knife throwing" action. His only hand is shaped to hold his sword and looks very similar to the hand on Kenner's Craig Cub doll, shown below. I'm missing Hook's vest, sash and sword. The small yellow dagger seen on his waist is from one of the many costume accessory sets.
In addition to Hook and Captain Peg-Leg, Matchbox completed this set with the Ghost of Captain Kid, which is an awesome looking figure and glows in the dark. A very impressive pirate ship playset was also produced. Matchbox also made a western series under the Fighting Furies brand, with characters Black McCoy, Crazy Horse, and Kid Cortez. Sundance the horse was also made as part of this set.

Here is a toy that Kenner made many years before they became known for their popular Star Wars action figures. This is Craig Cub from the "Official Scout High Adventure" collection. This Craig Cub doll is wearing the costume for the Steve Scout doll (which has brown hair), that is also from this series. The Craig Cub outfit is dark blue. Bob Scout and Dave Cub dolls were also made for this series along with adventure vehicles and playsets. Each of the dolls have a saluting action arm and the hand is shaped in the official scout salute position. (It's been many years since I was in scouts, so I can't recall what the name of the salute was.) This is a lesser-known series and in my experience the dolls are not easy to find, even on e-bay. This is a neat collection and I wouldn't mind completing the set someday. Below is a closer view of the face, hand and costume. 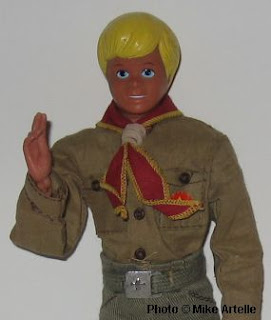 In the 1970s it was very common for toy companies to use comic book advertisements to promote their "dolls for boys" collections as well as smaller sized action figures. Here is a comic book ad I found for Kenner's Official Scout High Adventure series. Click on the picture to see a larger image. 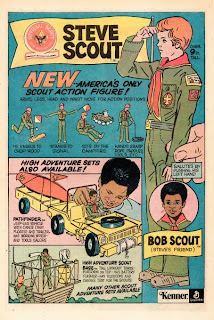 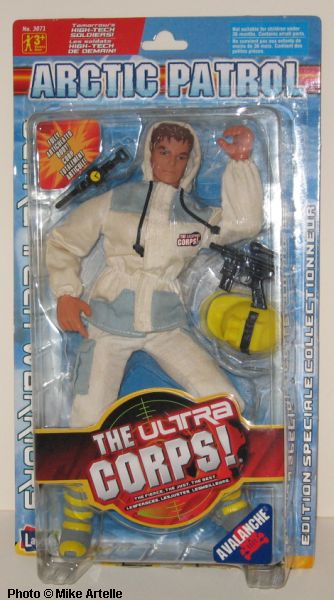 This series of dolls was produced at the height of the 12 inch doll "war" between Hasbro and Mattel in the late 1990s and early 2000s. The demand for this type of 12 inch doll was such that it allowed for copycat products with no distinct brand name to thrive. Among these, one of the better quality series to be offered was "The Ultra Corps!" by Lanard Toys in 1999. Above is Avalanche in Arctic Patrol outfit. This doll is very well-made with solid plastic, and the legs are more easily posed than Hasbro's G.I. Joe or Action Man dolls. The outfit is also well-made with thick, durable fabric. Several vehicles were also made as part of this series. Below is the back of the package showing the six characters in this collection. Many other characters were also available. 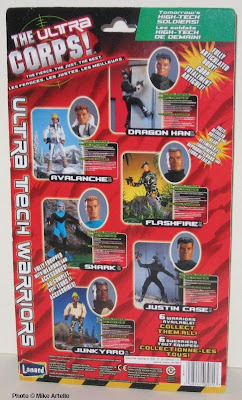 Gen 13, 11.5 inch doll by WildStorm, 1999
Here is Burnout from the "Gen 13" doll series based on the Gen 13 comic books. If I'm not mistaken the comics were published by a subdivision of DC Comics. Three dolls were made in this collection: Burnout, Fairchild and Lynch (see photos below). I recall Burnout was a pricey doll. I bought him brand new from the comic book store for about 55 dollars. Back in the late 1990s collecting superhero dolls was not taken as seriously as it is today (it's common now for companies to offer dolls priced at $300 and up), but at the time 55 dollars was a rare price point aimed at collectors. So although nothing is mentioned on the box, it's my impression that this doll was made as a limited edition collectable. 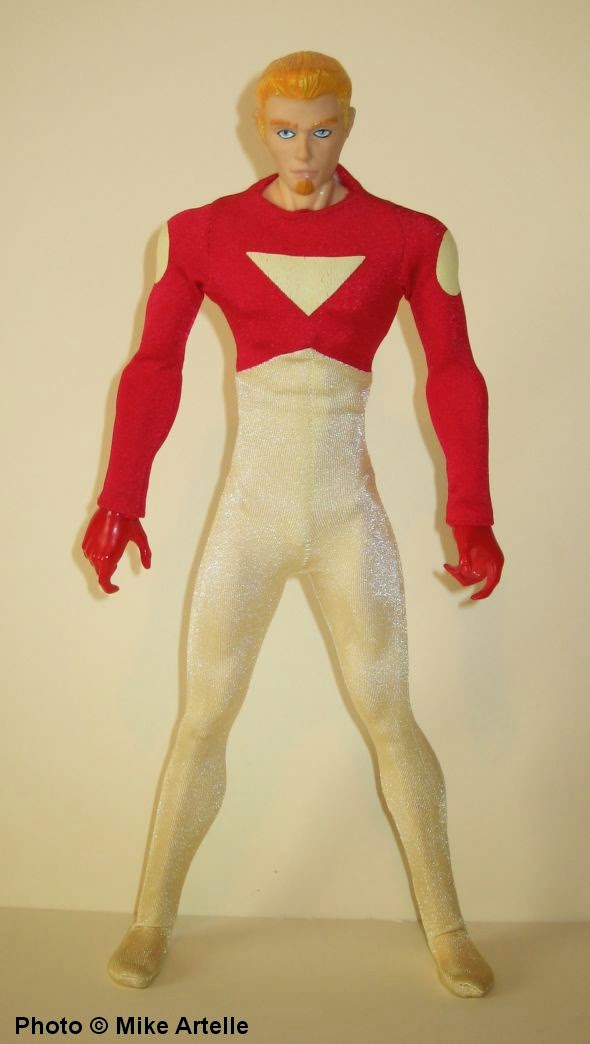 This is one of those dolls that I absolutely had to have. The second I saw it, I just connected with it and had to buy it. I've never read any of the comics, but I really like the look and design of this doll. I also liked the name Burnout. That's a cool name for a superhero. 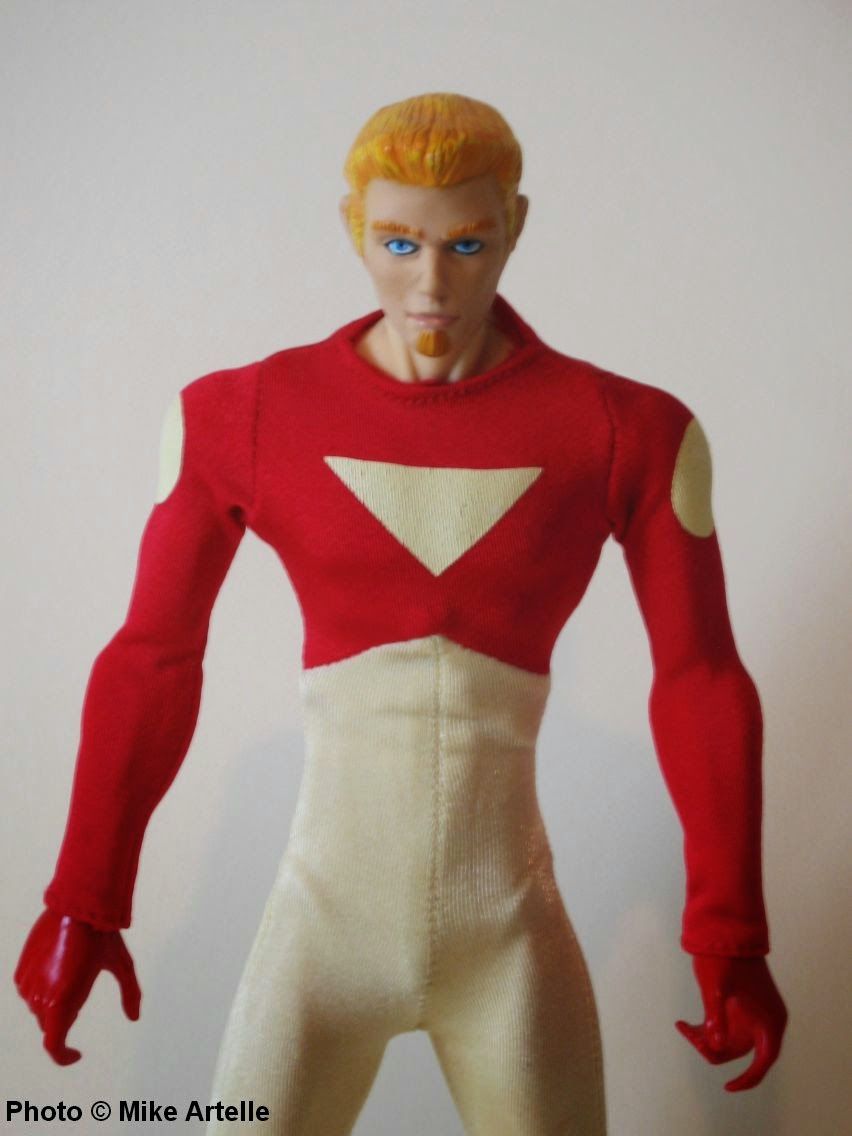 In my opinion the head sculpt for this Burnout doll is amazing! His face is both cute and handsome at the same time. He also has that look in his eye that seems to say "I'm going to kick your ass if you piss me off". I also like the fact that the body for this doll is sculpted to be thinner than a standard fashion doll or hero doll, as it looks like how the character was drawn in the comics. In fact this doll is very similar in style to the 8 inch Mego dolls, with 14 points of articulation just like a Mego. Some of the joints are exactly the same as a Mego as well. Unfortunately the movement of the joints is limited, but the doll can still be posed easily enough. 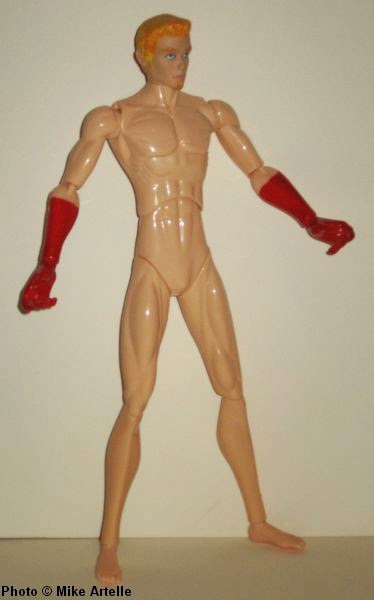 Here is the doll without the costume (oh my goodness he's buck ne'kid!) to show the muscular detail and how the doll is jointed. It's interesting that the arms are painted red. The hands on Mego dolls were made in different coloured plastic to match the costume, but the arms were often skin tone which showed at the end of the sleeve. Painting the arms like this will solve that issue. Collectors appreciate this type of extra detail. 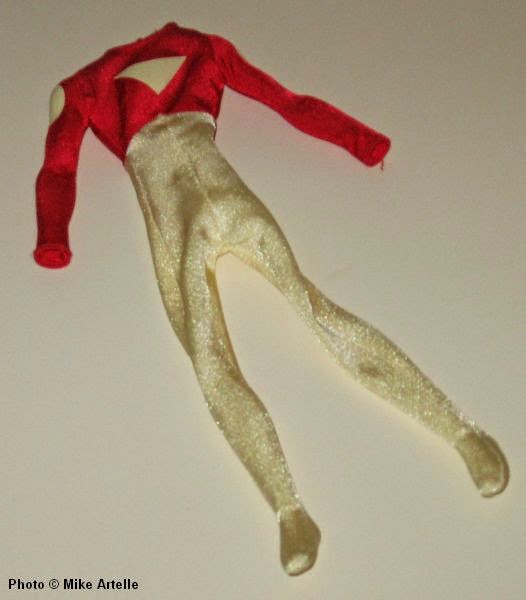 Burnout's one piece doll costume is reminiscent of the 8 inch Mego superhero doll costumes and is very well made.  The quality of the stretchy, spandex-like fabric is top notch, far better than I've ever seen on any superhero doll. The only negative about the costume is that the triangle and shoulder circles are decals that were painted onto the fabric, so they crack if the fabric is moved or stretched too much. Additionally, painted details like this on doll clothes tend to stick to things, such as the plastic of window box packaging or other toys, so the doll needs to be wrapped in cloth or tissue when put away in storage to avoid any damage. 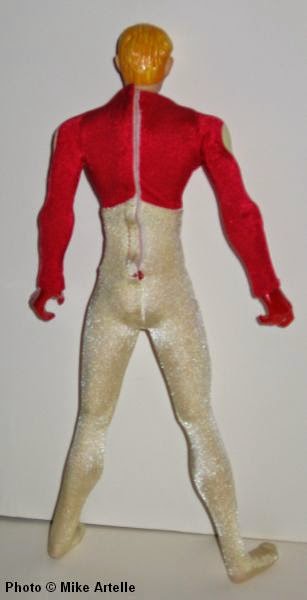 Here is the back view of the doll which has a strip of Velcro all along the opening. 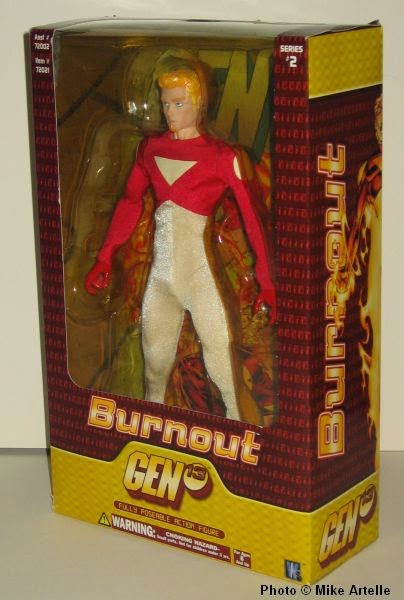 Gen 13 Burnout doll in the original box. The design of the box for this doll is amazing! It's perfect! 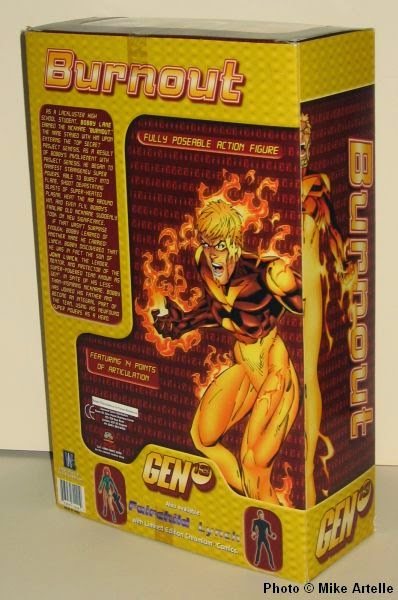 Back of the Gen 13 Burnout doll box.

Here's the text panel from the back of the box. Click on the image for a larger view. 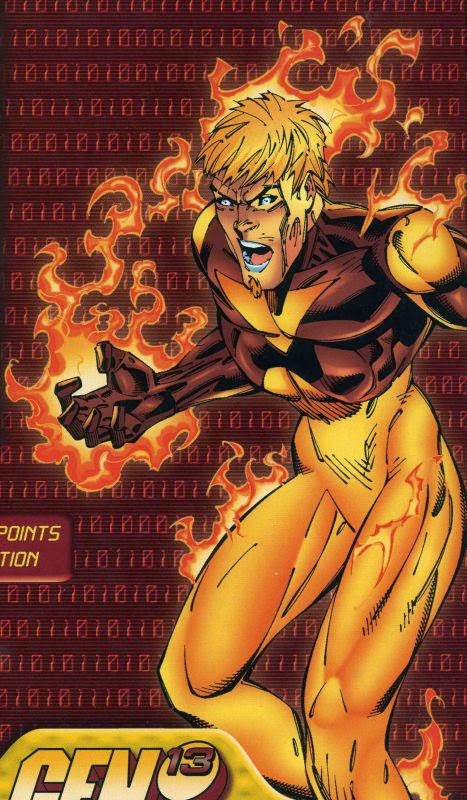 Burnout artwork from the back of the box. 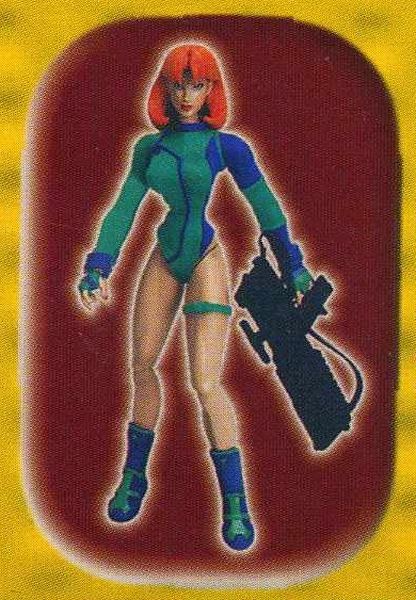 This is the image of the Fairchild doll from the back of the box. Below is the Lynch doll, which seems to have the same doll body as Burnout. 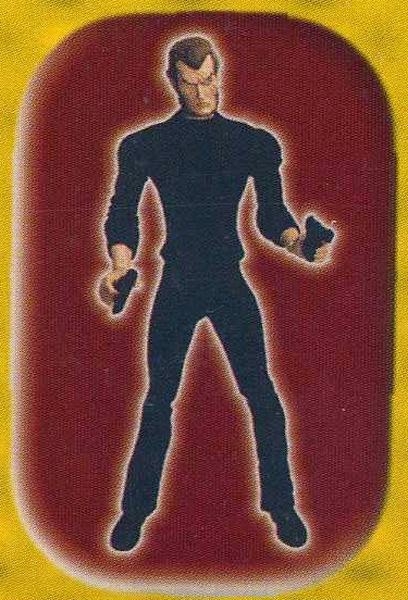 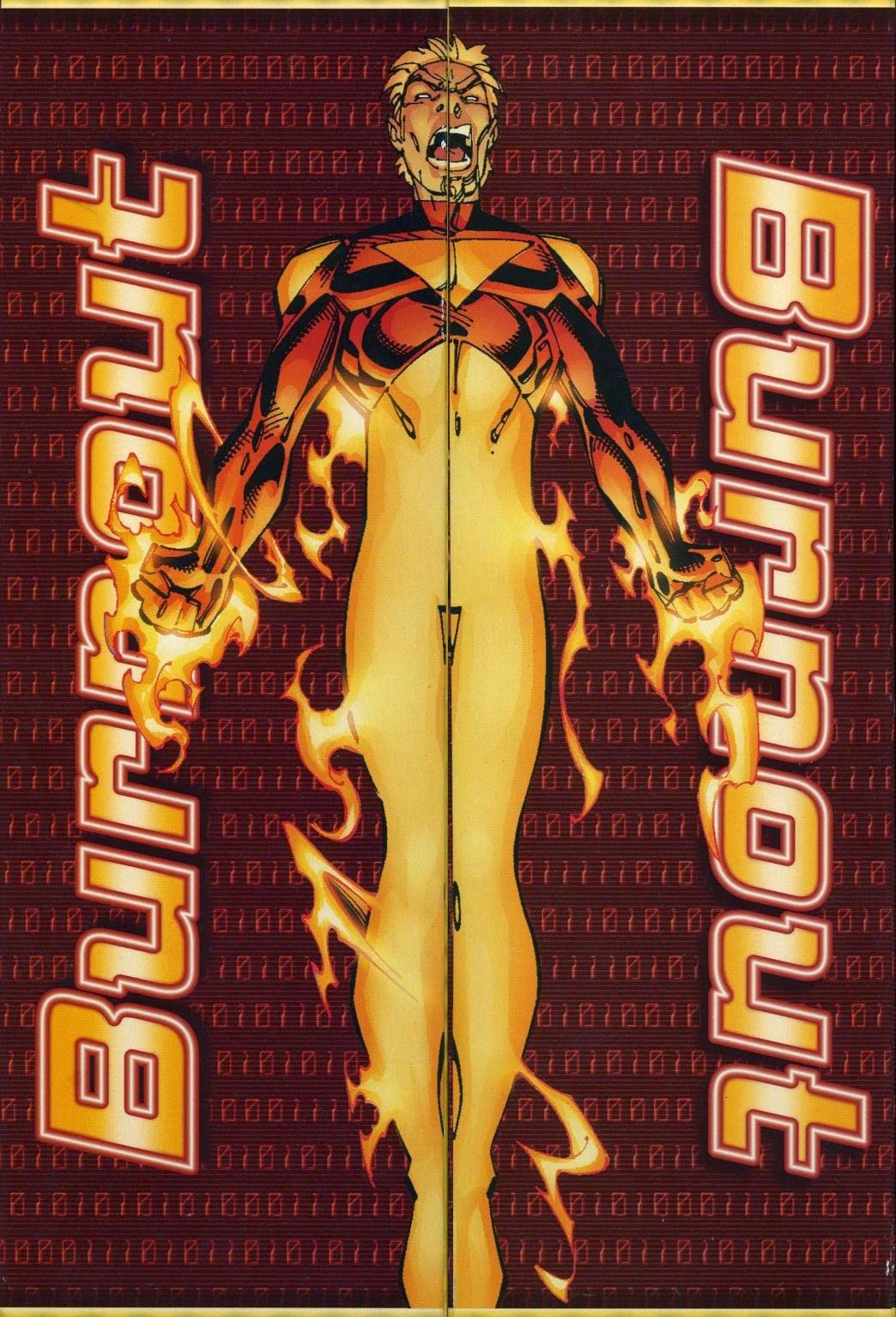 Burnout artwork from the sides of the box. I edited the two sides together to complete the figure. (Always wanted to do that! :) 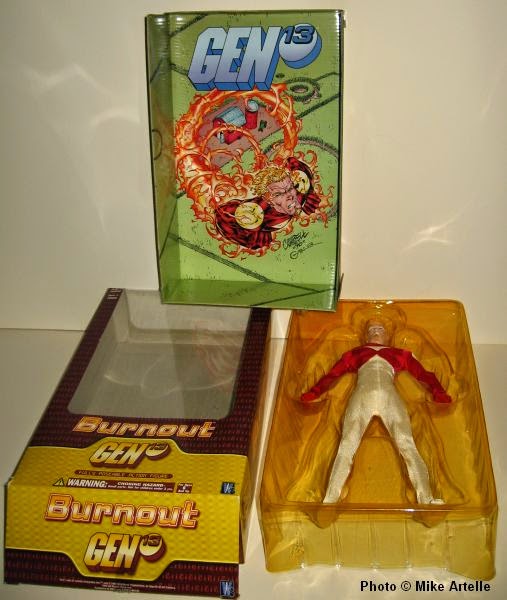 Here are the components of the box packaging. There's the window box, the insert showing some awesome artwork, and a plastic formed tray that holds the doll in place. Unfortunately this tray has yellowed over time, it used to be completely clear. 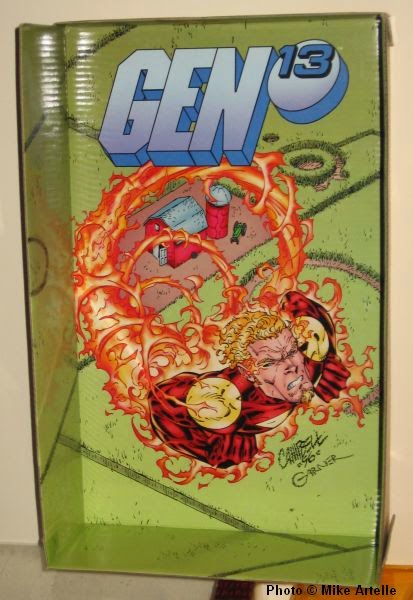 Here's a better look at the background artwork on the box insert, which shows Burnout as he appeared in the comics. Awesomeness! 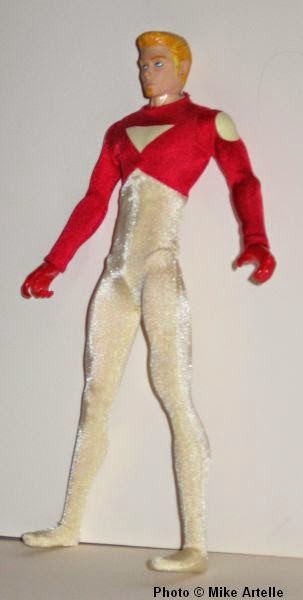 I really think this Burnout doll is awesome. It's easily among my top ten favourite dolls. The folks at the Wildstorm company did a super-amazing job on this one! 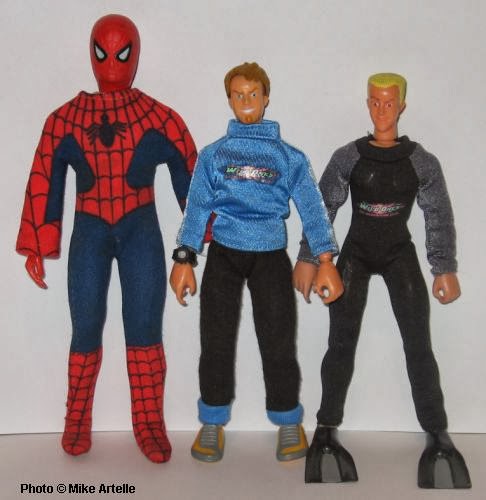 This is a fun and well made collection of 7 inch dolls made in the early 2000s. There were four dolls in the series, two of which are shown above next to the Mego 8 inch Spider-Man for size comparison. Each doll has 18 points of articulation. If I'm not mistaken, these dolls have the same bodies as the Madelman dolls, which are very popular in Spain. I really don't know much about Madelman dolls, but I think they may have been introduced in the 1960s after Hasbro's G.I Joe became a success. Madelman dolls were made with many different themes, in vast collections based on aboriginals, military, astronauts and many, many others. To my knowledge Madelman dolls weren't sold in North America, so this Wild Ones series might be the first Madelman-like doll series to be marketed here, but I don't know enough about them to say for sure. 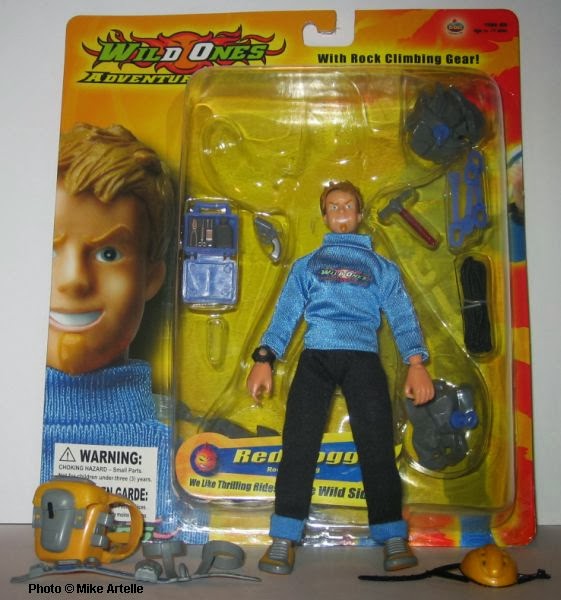 Here is Red Dogg the rock climber. The doll comes packed with lots of gear: helmet, backpack, tools, rope, belt, etc. Unfortunately one important item was missing...the hook for the end of the rope was not included even though it's shown on the back of the card, below. Aside from this however I still really like this figure. It comes very close to being as awesome as a Mego, but I like the 8 inch format better. 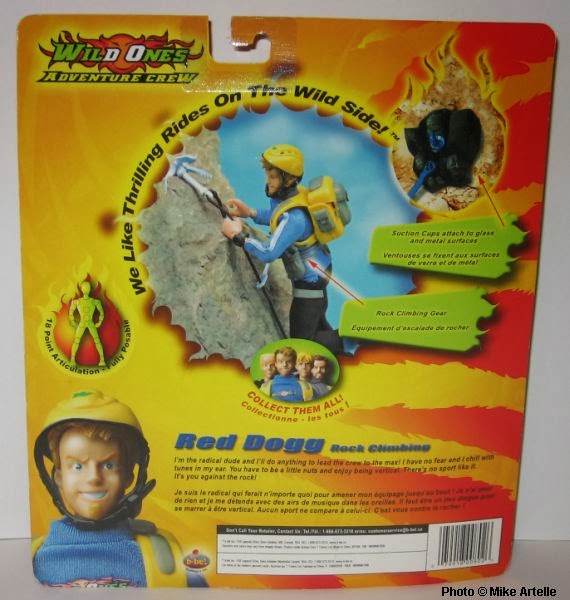 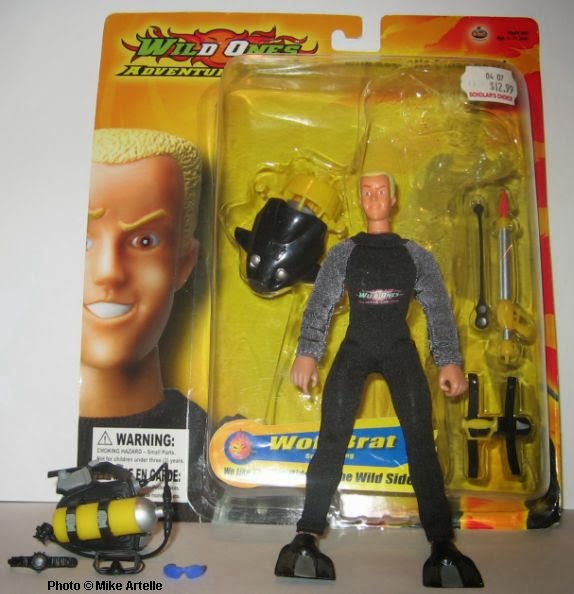 Here is Red Dogg's pal Wolf Brat the Scuba Diver. He comes with a bunch of gear as well. This one still has the original price tag which says $12.99. Below is the back of the card. 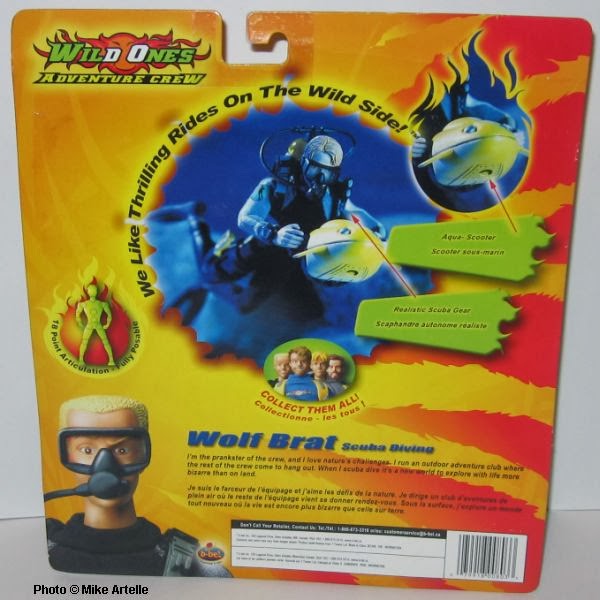 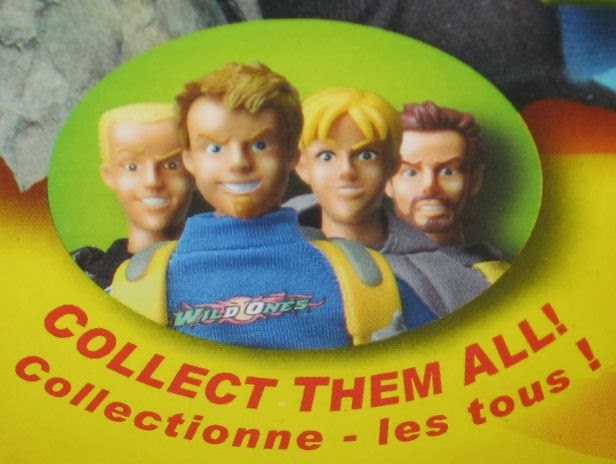 Here is the picture from the back of the card showing all four figures in the set. I have the only two that were sold on cards. The guy with the blond hair came boxed with a bicycle and the guy with the beard came boxed with an underwater ship of some kind. A jeep or truck vehicle and a large hang glider were also sold separately in boxes, but I don't recall if figures came with them.