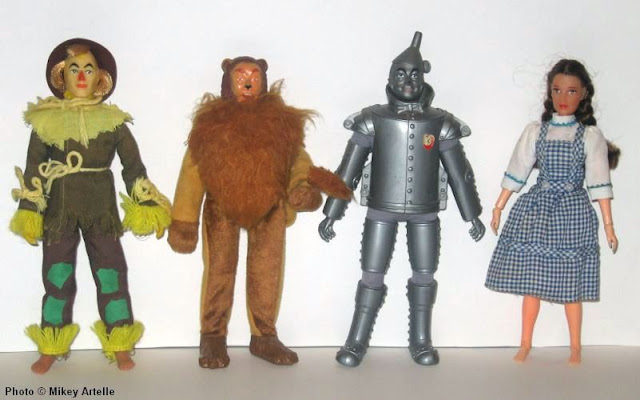 In 1974 Mego produced an excellent series of seven 8 inch dolls based on the 1939 Wizard of Oz movie. To my knowledge this is the very first doll line ever to be based on this classic film rather than the original storybook. Shown above is the Scarecrow (missing his shoes and diploma), the Cowardly Lion (missing his bravery medal), the Tin Man (missing his axe), and Dorothy (missing her white socks and red shoes). Dorothy originally came with a yellow plastic basket and a one-piece plastic grey figure of her dog Toto. The other dolls in the series include the Wicked Witch, Glenda the Good Witch, and the Wizard. To complete the collection Mego made an Emerald City Playset and four Munchkin figures (Mayor, Flower Girl, Dancing Girl, and General). Unfortunately the Munchkin figures were rather poorly made as three of the figures are action figures rather than dolls, for which the body of the figure has the clothing sculpted and painted. In addition the legs are not articulated or poseable. A castle playset for the Wicked Witch was also sold exclusively at Sears stores. Mego also produced a set of larger sized plush dolls with plastic heads based on the four characters shown above. 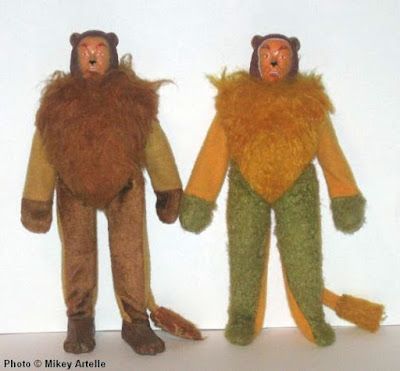 The Mego Cowardly Lion 8 inch doll was produced with different colour variations for both the head paint and the fabric used for the costumes. The heads can be found painted with an orange face or a yellow face. The two dolls shown above have the orange face but different coloured fabric was used for their costumes. The Lion suit on the left was made with light brown fabric and fake fur, while the suit on the right used an orange-tan fabric and fur with shorter light brown fur accents. Dolls with yellow faces can be found with yellow fabric outfits and fur. I've also seen the orange faced Lion with a brighter orange fabric costume. For this version the chest fur section is more like a thick felt type of fabric. The lion doll on the right is missing the shoes which are shaped like lion feet, as seen on the left doll. There is no variation in the colour of the lion shoes, all were made in light brown plastic. The Scarecrow doll also has a variation with regards to the tuft of hair on his forehead, as earlier produced dolls do not have this tuft of hair. 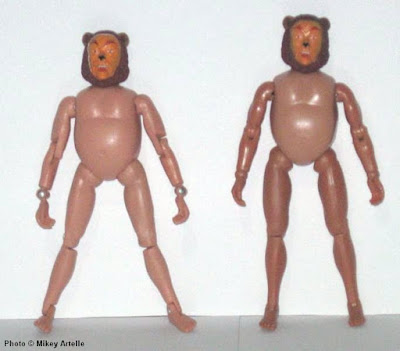 All of the male Mego 8 inch dolls that were produced from 1971 to 1974 were made with Type 1 doll bodies. At some point in 1974 Mego introduced their revised and very much improved 8 inch male doll body. As such, male characters that Mego continued to produce in 1974 and onward were made with Type 2 bodies. Due to the switch over to the Type 2 body certain male Mego dolls can be found with both Type 1 and Type 2 bodies, as is the case with the male characters from the Wizard of Oz series. Above is an example of the "Fat Body" used for the Cowardly Lion and the Wizard dolls. On the left is the Type 1 Fat Body which has metal doll joints, and on the right is the updated Type 2 Fat Body which has plastic joints. Type 1 doll bodies are quite crude in their design and the legs tend to spread out to the sides rather than keep the doll standing naturally, as seen with the Type 2 body. A side view is shown below to show the metal joints in the elbows, wrists, ankles and knees. 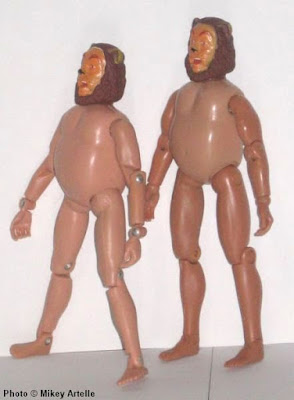 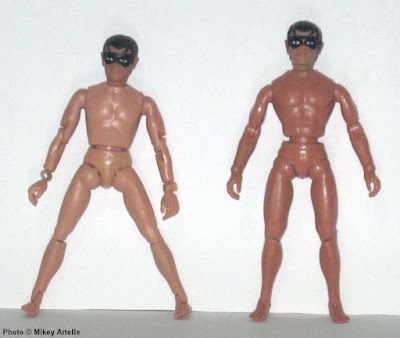 Above is the standard male Type 1 and Type 2 doll bodies as shown on Batman's sidekick Robin from the DC Comics superhero line, part of Mego's "Official World's Greatest Superheroes" series. These are the same doll bodies that the Scarecrow and Tin Man dolls have, however their hands were made with yellow (Scarecrow) or grey (Tin Man) plastic instead of skin tone plastic. Below is the side view. The shape of the hands for the Type 1 doll are quite different from the Type 2 doll. This is one of the ways collectors can quickly identify if a doll has a Type 1 or Type 2 body... aside from the spread open legs of the Type 1 dolls. Looking at the doll hands in the photo at the top of this page you can see that Tin Man is a Type 1 doll while Scarecrow is a Type 2. 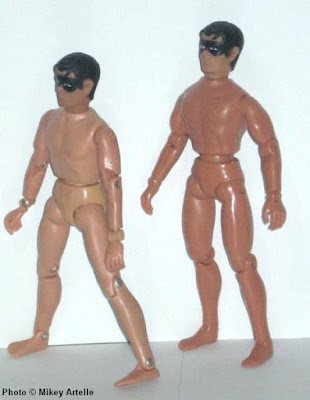