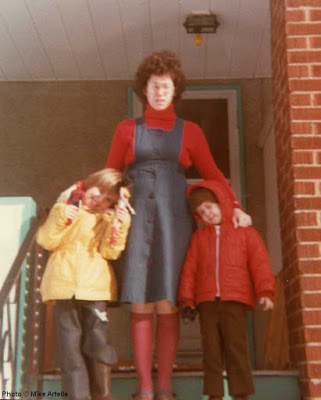 This photo shows, L to R, my brother Steve, my mom (Peggy) and me on the stairs in front of our house in the late 1970s. My sister Shannon took the photo. My siblings and I decided it would be fun to take a photo specifically with all of our Mego dolls, as my parents had bought one for each of us over a period of time. My brother is holding up his 8 inch Spider-Man Mego doll, and as my sister was taking the photo, he held up her 12 inch Wonder Woman Mego doll for her. The very first Mego I ever owned was Fonzie! As you can see, I forgot to hold Fonzie up for the photo, which my brother gleefully rubbed in moments after the picture was taken. As the Mego company didn't release the 12 inch Wonder Woman doll until 1977 the above photo would have been taken between 1977 to 1979, as we moved from that house in 1979.

This is the only photo of me with my Fonzie Mego from that time. It was a present for my birthday in Nov 1976 when I turned 3 years old. This is the very doll that started my obsession collecting Megos and other dolls. It's evident by the brown blur where the doll's head is that this is the version of the doll with brown hair rather than black, which is what I recall. It's too bad I don't have any better photos of this doll because I remember the face being quite different than the commonly available Fonzie doll, and the jacket was different too. I suspect that the Fonzie doll I had was like the one seen in the Sears catalogue advertisement (shown on the "TV Character Dolls Part One" page of this blog at this link: http://mikeysdolls.blogspot.ca/p/tv-character-dolls.html).

Not long after this picture was taken I lost that Fonzie doll and didn't find another one until I was in my early 20's! When I found the second Fonzie Mego in the early 1990s (long before the internet and e-bay made vintage toys so accessible) I was with some friends at a flea market, and the moment I saw the doll I freaked out. My friends thought I was completely nuts! Maybe they were right, but I didn't care. At last I had found another Fonzie Mego! 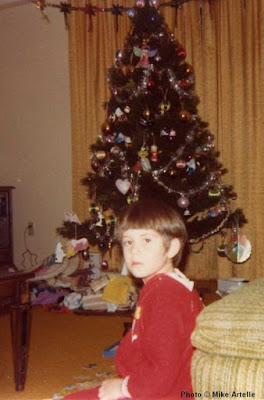 Here I am in December 1979 at our house in Milton, Ontario where we lived very briefly before returning to Ottawa. My brother's Spider-Man Mego doll is clearly visible on the floor in the background next to the pile of stuff under the tree. This Spidey doll is likely the same one that he's holding in the above photo. By this time my Fonzie Mego was long gone, but my parents had bought me the 8 inch Batman and Robin dolls along with the Batmobile that went with them. Unfortunately I don't have any pictures showing those Mego toys but I likely would have received them during this Christmas in '79. I have fond memories of my brother and I playing with our superhero Megos at this house, and chewing on Spidey's head - but what kid didn't do that with their Spidey Mego! :) In the photo, I'm making a puzzle of Kermit the Frog that is based on the very first Muppet film "The Muppet Movie", which I still have today! (shown below) 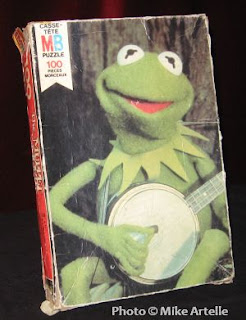 Posted by Mikey Artelle at 8:18 PM