Censorship is not the answer to solving racism.

One of my favourite TV shows is The Dukes of Hazzard. It was produced between 1979 to 1985 and was a big part of my childhood. The program had been out of the public's radar for several years in the late 80s and early 90s, but made a big comeback through reruns and on DVD in the mid 1990s. So much so that two TV movies were made, in 1997 and 2000, followed by a feature film in 2005. Shown below is a 1/18th scale die cast toy car produced by Ertl in 2001 based on the real star of the program, the Duke Boys' car "General Lee". 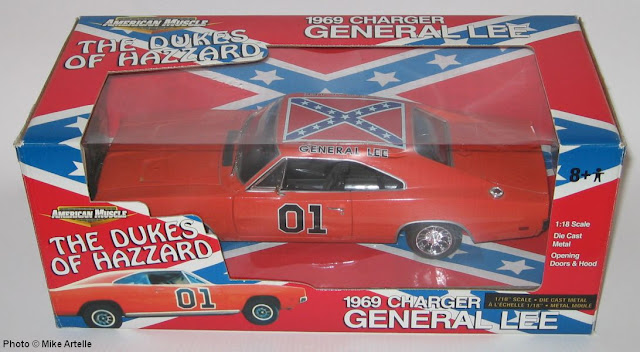 As you can see, the General Lee has a huge Confederate flag on the roof. For this reason alone Warner Bros, the studio that owns The Dukes of Hazzard TV show, has officially stated that it will no longer allow any merchadise based on the General Lee to be licenced and produced. Additionally, an American TV station, TV Land, has pulled the TV show from their broadcasting schedule, which is clearly a move toward banning the program from being aired on TV. Fortunately another station, CMT, has continued to air the program.
[Sources:
http://www.cbsnews.com/news/warner-bros-to-stop-dukes-of-hazzard-general-lee-toys-with-confederate-flag/ ]

This reaction to the program is based on a tragic event involving racism that happened in the United States, that had nothing what so ever to do with the TV show. The tragic event spawned a demand to remove the Confederate flag from any and all spaces where it is on public display. Apparently, it doesn't matter that there is not a single episode of The Dukes of Hazzard that has anything remotely to do with racism.

Simply put, this excellent, much loved family TV show and the merchandise based on it have now been censored from the public due to an irrational demand to remove the Confederate flag from all traces of our popular culture. 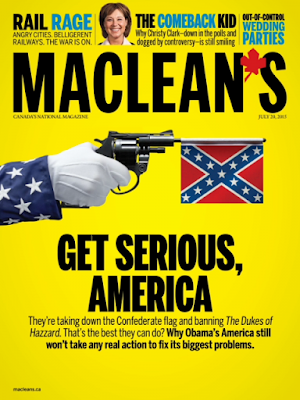 The July 20, 2015 issue of Maclean's Magazine featured this same topic as their cover story, and included the very appropriate headline "Get Serious America". The text beneath the headline reads "Their taking down the Confederate flag and banning The Dukes of Hazzard. That's the best they can do? Why Obama's America still won't take any real action to fix it's biggest problems." I was so relieved when I discovered this magazine, as this article reassured me that our society hasn't gone completely nuts, and that it's widely believed that banning The Dukes of Hazzard as a response to racism is quite pathetic. 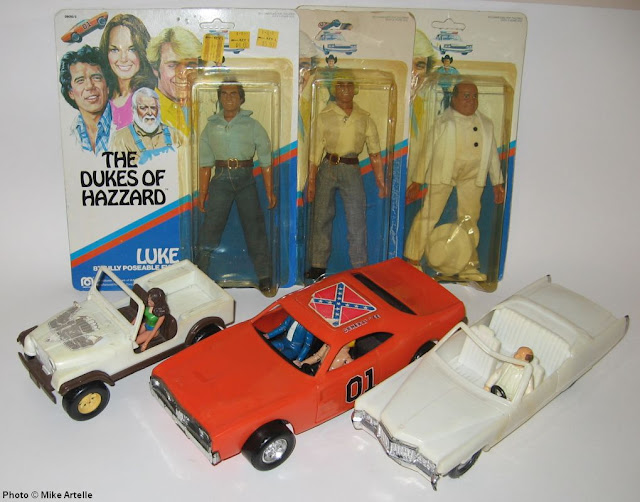 This rush toward censorship is absolutely wrong, and an illogical way of thinking that contributes to pushing North American society down a very slippery slope. Here in Ottawa a man was publicly ridiculed and vilified for wearing a pair of shorts that had the confederate flag printed on one side. A complete stranger took a picture of him and posted it online with comments, essentially defaming him, and others joined in posting their own comments as though on a witch hunt. "The man with the confederate flag shorts" became a major news story, and his real name was made public. From what I understand, nobody bothered to speak with him until after the news story broke. They took one look at him and assumed the rest.  This is a completely irrational and unjust way of thinking! But what is most alarming is that it was all done without his knowledge and he learned of it after the fact. I find this incident is so foolish it's as though people have lost all common sense!

What I do agree with, wholeheartedly, is that the events that happened in the United States, in which a racist white man murdered several black people, is a horrific tragedy. No human being deserves to be murdered simply because of the colour of their skin, and for this to happen in 2015, when our society is supposed to be so much more enlightened and understanding than our society from decades past, makes this whole thing that much more tragic.

It's because of this event that people are understandably angry, and so they need to do something that will make them feel like something good is being done to justify the loss of life. Therefore many have turned to the Confederate flag and deemed it to be a symbol of hate. Apparently, our society has become so politically correct that time for discussion is no longer permitted. A group of angry people have deemed the flag to be a hateful symbol and so everyone else is now expected to fall in line... immediately and without question!?! I haven't the words to express how wrong that is! What ever happened to being a democratic society? 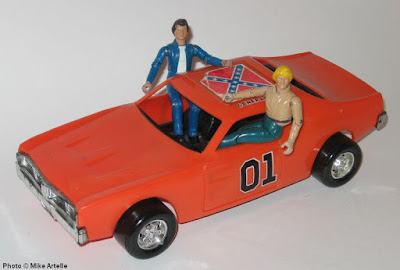 The General Lee toy car and action figures of Luke Duke and Bo Duke,
produced in 1980 by Mego.

This is all made even more absurd when taking into consideration that one of the main story arcs in The Dukes of Hazzard, which continued throughout the entire seven seasons of the program, has to do with Uncle Jessie Duke teaching Luke Duke, Bo Duke and Daisy Duke strong family values. As such, the show also often delt with the moral issue of how to get along with each other. Evidently, those who want to ban this TV show and related merchandise could learn a thing or two if they sat their behinds down and watched a few episodes. The "Duke" family are good, decent people who pray before they eat!

Additionally, the show's popularity thrived on the inclusion of comical situations, physical comedy, and plain silliness that was featured in every episode. The "villains" of the show, Boss Hogg and Sheriff Rosco, are essentially a modern day Laurel and Hardy. That anyone would take offence to a TV show of this nature is just completely ridiculous!

Sadly, this path of censorship vilifies others for no justifiable reason, giving power to the tragedy rather than dimishing it. The quest to keep the Confederate flag "out of sight and out of mind" is just a band-aid solution to the bigger, genuine problem of racism. Only now the problem has been made even worse because rather than tear down barriers, people have built them up by deeming anyone who displays the Confederate flag to have racism as their motivation for doing so, where in fact there was none... such as in the case of The Dukes of Hazzard. 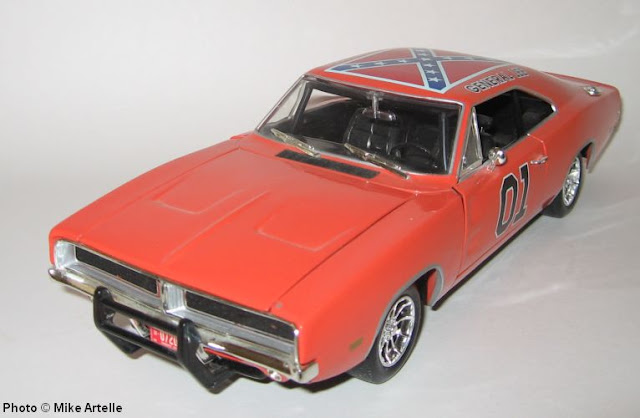 Another view of the1-18th scale die cast car made in 2001 by Ertl.
I am white, but I am not racist for having the opinion that censoring the Confederate flag from all traces of our culture, including TV shows such as The Dukes of Hazzard, is wrong and irrational. This TV show is a part of my culture. I grew up with it, and as an adult I still enjoy it. Black lives absolutely do matter. All lives matter, equally on the same level, including white lives. My culture matters too, and Dukes of Hazzard is a part of it. I own all seven seasons of Dukes of Hazzard on DVD. This is a family program, there is nothing racist about it... at all! If seeing the flag on the hood of the car upsets people, then those people simply should not watch the show, or purchase the toy cars, or any other related merchandise.

Give your heads a shake people. You cannot systematically prevent others from enjoying their culture banning "this" today and "that" tomorrow. Such logic is akin to burning books. Censoring someone else's culture based on your own needs only breeds more racism... but it's not found within people like me who are fans of this TV show, it's within those who would now vilify me for something as simple and harmless as being a fan of The Dukes of Hazzard.


Censoring our popular culture does nothing but impose an irrational expectation on others to comply with an irrational demand. This is unjust punishment of the innocent for punishment's sake, which serves only to diminish our society further, rather than rebuild it.
Posted by Mikey Artelle at 2:45 AM