In 2015 Figures Toy Company has been busy expanding their series of Mego-like superhero and TV character dolls. Recently I picked up a few new additions for my collection.... 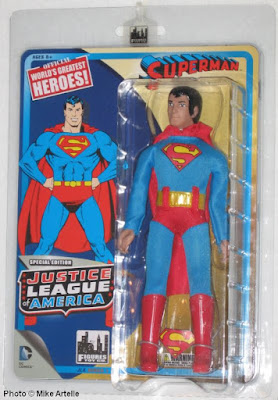 Justice League of America Superman
This is a reissue of the original Mego Superman doll with a few updates to the costume to make it more comic book accurate. The blue is brighter fabric, belt loops have been added, and the chest logo is larger. 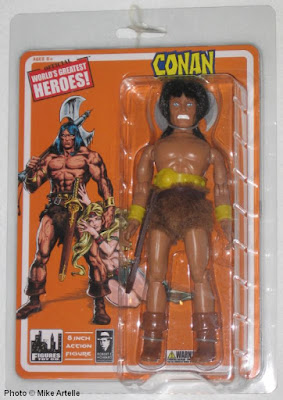 Conan the Barbarian
This is a reissue of the original Mego Conan doll. It's a very close reproduction with a few subtle changes. For example the rooted hair is styled differently and is longer at the back, the fur shorts are darker brown and are made out of a nicer fake fur fabric than what was available in the mid 1970s, while the torso is modeled differently than an original Mego torso. Details on the eyes and mouth are painted differently as well. 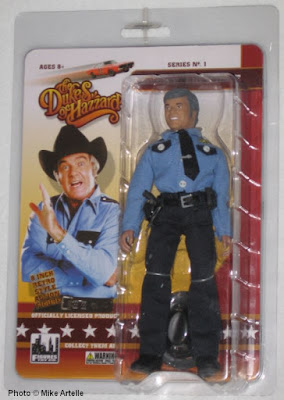 Sheriff Rosco P. Coltrane
Back in 1980 when Mego released their Dukes of Hazzard series of dolls they didn't include Sheriff Rosco in the collection, which for many fans left the collection feeling incomplete. For 33 years Mego and Dukes fans have wished for a Rosco Mego doll, and finally it has happened in 2013! Toy Figures Company did an awesome job on their Rosco doll including several details on the costume. The Head sculpt in particular is better than FTC's usual offerings, which often have heads that are too big. The likeness of the face sculpt to actor James Best is very well done too.
Posted by Mikey Artelle at 8:26 PM